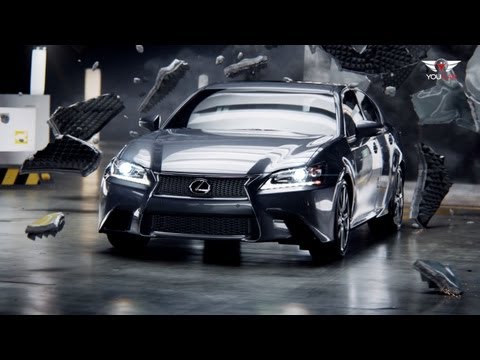 Lexus social media channels are now showing “The Beast”, a 30-second spot for the 2013 GS – its first TV commercial ever for the Super Bowl. The ad spot shows the 2013 GS as it gets away from being contained. It’s aimed at demonstrating the new design direction of the brand. The GS will start selling this February. Furthermore, this ad hints at the other new models that will be out later this year.

The ad will be broadcast at the end of the first quarter during the Super Bowl. Lexus revealed a preview of this commercial a few weeks ago on YouTube and on Facebook.

The new look of Lexus is first seen in the Lexus GS – the first of 9 new or updated models that will be launched this year by Lexus, according to marketing VP Brian Smith. He also said in the statement that this ad is “very different” from what Lexus has done previously.

The engineering team wanted the new GS 350 to have a design that speaks of strength and agility. They used the Lexus LFA supercar as an inspiration and even used some significant elements to give drivers an experience that can only be described as engaging.

These elements include a new platform that has a wider stance, a more rigid structure, better support for the seats, a distinctive exhaust and engine sound, a quicker shirting transmission, and a new aerodynamic body.

The new platform has more spot welds and laser welds than the previous one, which is the result of extensive testing done by the carmaker’s engineers. The track is wider by close to two inches and has a redesigned suspension to guarantee a solid stance and improving cornering performance.

The suspension system gives the 2013 GS the ability to conquer corners with utmost precision. Up front, the aluminium lower and upper control arms have bigger bushings. The subframe at the back has also been redesigned to accommodate the new rear suspension. The better suspension geometry improves rear control while maintaining tire cornering force. Because of the new platform plus the lighter parts, lighter-viscosity oil may be used for the shocks, allowing them to respond more quickly and move easily.

The use of rear and front control arms lowers the unsprung weight while also improving agility, ride comfort, steering precision, roll damping, and body control. The suspension is both stronger and lighter, making it very responsive to driver input and very quiet. You also have the ventilated disc brakes that have the four-piston front calipers with the electronic improvements. This helps you get braking control and balance.