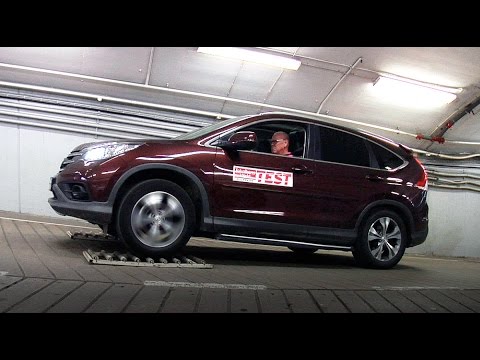 This is not the first time the Swedish magazine faces the same problem with the CR-V as they also did this test with the previous CR-V model and after a software update from Honda, the vehicle performed well.

Now, the new model shows the same problems and it is not able to climb uphill when the front wheels have no friction. According to an official response from Honda, its AWD system uses a compact, fuel-efficient rear differential and its design requires certain torque limitation for the device to work effectively in real conditions.

Honda says that in real conditions, there is a certain amount of friction always available for both front and rear wheels. What’s more interesting is that the magazine also did the same test with a Ford Kuga and this model passed the test. Conclusion? The Honda CR-V needs a software update as soon as possible!

The sleek new front headlamps of the new Honda CR-V make use of halogen bulbs, HID projector headlamps as well as LED daytime running lights. These lighting elements don’t deliver an optimized level of road visibility, but also lends the new CR-V with a bold face.

For the 2015 model year, Honda aimed to give the new CR-V a stylish yet more functional interior, which was achieved by employing high-quality materials on key surfaces as well as by reshaping the chrome-effect inlay that runs the full width of the redesigned dashboard. The redesign was implemented to improve visibility and access to the new seven-inch touchscreen that shows the new Honda Connect system. Interior comfort and versatility have been improved through a sliding armrest – with a 60-mm fore and aft between the front seats.

On the rear cabin, the CR-V comes with a one-action fold down rear seat system. Since the rear seats feature a 60/40 split function, they could be easily folded flat with just a simple pull of a handle, thereby transforming the new CR-V into a versatile vehicle.