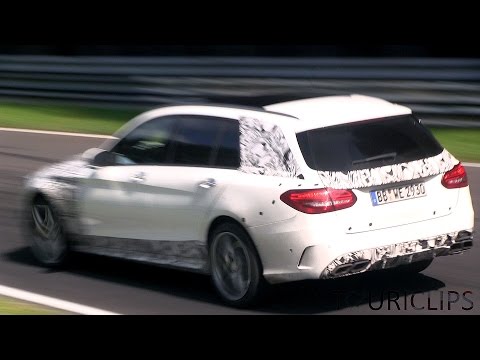 The 2016 Mercedes-Benz C63 AMG will make its debut on September 24 and it appears that the high-performance model is in the final testing phase. Recently, photographers snapped the 2016 C63 AMG Estate on the Nurburgring and if you look at the video you’ll see that the new vehicle is definitely a very fast car.

Also, the new twin-turbo V8 engine seems to do a good job and deliver a proper sound. For those who don’t know, the 2016 Mercedes-Benz C63 AMG will use the all-new M178 V8 twin-turbo engine that will be found on the upcoming 2015 Mercedes-AMG GT, which will be introduced on September 9.

On the brand new coupe, the 4.0-liter twin-turbo V8 engine will produce between 461 and 510 hp. On the new Mercedes-Benz C63 AMG, the engine is expected to deliver only 450 hp. Although the engine will be less powerful than the outgoing 6.3-liter naturally aspirated V8, the new C63 AMG will be lighter and faster.

On Friday, we also revealed you folks the first images featuring the interior of the 2016 Mercedes-Benz C63 AMG. The photos showed new AMG sport bucket seats, a redesigned steering wheels with silver-painted paddle shifters, a 320 km/h (200 mph) speedometer and a speedometer limited at 8,000 rpm as well as a Burmester premium audio system and the new touchpad.

The exterior is expected to feature a new front bumper with big air intakes, enlarged fenders, side sills, as well as a new rear bumper with integrated exhaust system. In addition, the vehicle will feature new wheels, hiding large brake discs and new brake calipers fitted with the AMG logo.

Mercedes-Benz is also expected to offer an S version of the C63 AMG, which will be more powerful and will feature the 4Matic all-wheel-drive system. In October, the 2016 C63 AMG will be officially introduced to the public at the 2014 Paris Motor Show, so stay tuned!

The design of the new V8-powered Mercedes-AMG C63 – adhering to the mantra of form follows performance – takes inspiration from motorsport while reflecting its remarkable technology. Its fascinating appeal is thanks to the fusion of sensual clarity and stylish sporting character. Both the Saloon and Estate versions of the C63 feature a design that indicates them as members of the Mercedes-AMG family. Certain design elements distinguish the exteriors of the C63 and C63 S.

As designed, the Mercedes-AMG C63 exudes a dynamic character as made possible by adding more tension to the emotional, sensual surfaces and reduced, minimalist forms of the C-Class. Its powerful V8 engine and wider track are complemented by a standalone front end, which has lengthened by 54 mm.

The aluminum front wings -- bearing "V8 BITURBO" lettering -- of the C63 are now wider on each side by 14 mm. Mercedes-AMG also reinforced certain areas of the structure of the body-in-white, thereby compensating for the longitudinal and transverse forces generated both by the drivetrain and running gear.

The sporting character of the new Mercedes-AMG C63 is clearly accentuated on the front end, just like the two distinctive power domes on the long aluminum bonnet. These power domes, along with the wider wings, deliver a muscular look for the new C63. The C63 also dons an arrow-formed "twin blade" radiator grille -- with AMG lettering – that is positioned in such a way as to lower its visual center of gravity.