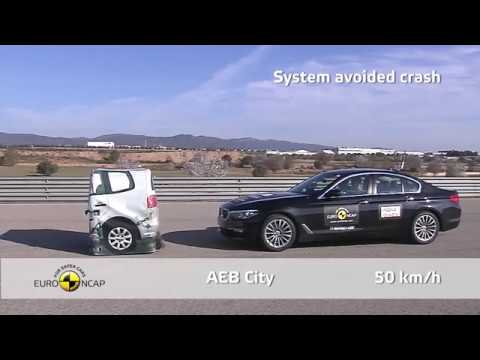 BMW is well known for its premium aesthetic releases and a compelling performance in the upper mid category. And now it can add another achievement to its long list of successes: the German automotive company's latest BMW 5 Series (G30) bagged a 5-star rating safety in the Euro NCAP Crash Test, securing a solid 81% overall score.

The midsize sedan got an impressive 91 percent rating in adult occupant safety, while getting a splendid 85 percent in the child occupant safety. The premium car also bagged an 81 percent rating in the pedestrian safety evaluation. The impressive performance of BMW gained the respect of the Euro NCAP body, which remarked that the sixth-generation model series' performance in the pedestrian safety assessment was remarkable due to its classic active hood and "Person Warning" setup that has a city braking duty.

Euro NCAP also lauded the BMW 5 series' autonomous breaking tech and remarked that it was effective in guiding the driver dodge a crash with another vehicle or a pedestrian. With its superior results on vehicle occupant protection made for children and adults, standard safety features and pedestrian protection, the BMW 5 series automatically clinched the top spot within its segment. Furthermore, it is now considered as the 1st BMW vehicle series to obtain a perfect score on the Euro NCAP crash test rating for its impressive safety features.

The key on why the BMW 5 series grabbed maximum points on the Europe's leading crash test is based on the entirety of the safety concept equipped in all of the new models. Remarkably tough structures and large sized and accurately defined deformation sections found in the passenger area make it function as a survival cabin for passengers in a high impact collision. Another safety novelty that BMW came up is the effective restraint system found in the interior of the vehicle, mainly controlled by a safety electronic setup, feature front and airbags that will secure the pelvis-thorax as well as curtain head airbags found in both seat rows.

All seats inside are equipped with 3 point automatic seat belts, the restraint setup is suited with belt force limiters and front seaters can appreciate its belt tensioner function. BMW 5 series also boasts of its Dynamic Stability Control that enhances active safety for the vehicle occupants. The wide array of functionality of this feature secures effortless controllability and protected steering even in harsh events on the road. The vehicle which participated in this safety assessment was a 2017 520d in the left hand drive specs, which acquired a 59% score at the Safety Assist Assessment.

The fresh 5 series wasn't the sole participant of the crash test. The NCAP body also assessed the Ford Mustang and the Fiat Doblo with dismal results. The Fiat Doblo only received 3 stars out of 5, with NCAP saying that the vehicle's true age reveals the lack of desire to compete on safety with more recent rivals in its category. The Ford Mustang fared much worse, obtaining a disappointing 2 stars.

Launched late last year, the seventh-generation BMW 5 Series continues its successful track record in Euro NCAP’s Executive Car segment. The car showed good all-round performance in crash protection and avoidance tests thanks to its new platform, body and updated safety features. Track tests demonstrated that the autonomous braking system can effectively assist the driver in avoiding or mitigating critical rear-end crashes with other cars and pedestrians. With an 81 percent score, the 5-series particularly impressed in pedestrian safety through its standard-fit “Person Warning” system and active bonnet.

Thirteen years after the tests on the original FIAT Doblò, Euro NCAP has taken another look at the versatile small MPV. The latest generation Doblò was already introduced in 2010 and is also sold by Opel and Vauxhall brands as Combo. The version tested by Euro NCAP is the 2015 Doblò facelift that includes, apart from small safety updates, cosmetic upgrades aimed at extending the lifecycle of the car. The three-star Euro NCAP safety rating, however, reveals the car’s true age and highlights the lack of ambition to compete on safety with other, more modern competitors in the segment. The Opel/Vauxhall Combo has not received a similar facelift, so would be expected to end up with even fewer stars, but Opel have their eyes fixed on the future.

Euro NCAP’s Secretary General, Michiel van Ratingen, said, “FIAT’s line-up now features several cars that have been on the market for a long time and their safety is well behind the class leaders. Opel have made a clear decision not to implement the changes that FIAT made to get to a three-star rating, but instead have focussed their attention on a complete new Combo, that is being co-developed with Opel’s new owners, PSA, and which Euro NCAP expects to test early next year. In this release, however, BMW has led the way with a new 5 Series that features lots of driver assistance systems which Euro NCAP believes will transform safety in the years to come.”