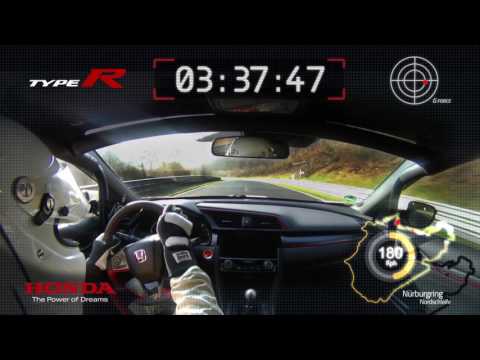 It seems like a never-ending battle between the 2017 Honda Civic Type R and the VW Golf GTI Clubsport S when it comes to owning the Nürburging record.

This story began all the way back in May 2015, when the Honda Civic Type R took the crown for the fastest four-wheel-drive production car around Nurburging, finishing at 7:50.63. Later on, Volkswagen took their GTI Clubsport S to the same course and it crossed the finish line, just by a little more than a one second difference, at exactly 7:49.21. Since then, VW has held the crown for that record. In fact, VW recently went back to beat its own record by a few milliseconds, that is now at 7:49.19.

But the story does not end there, on April 3, 2017, the newest Civic Type R went back and did a “time-attack attempt” at the Green Hell, and crossed the finish line with a time of 7:43.8 – beating the record of the GTI Clubsport S. That was over three seconds faster than VW’s record, and almost seven seconds faster than the older Type R model. This event took place during the last stage of development, which explains why they mentioned that it was a development car they used.

To ensure the safety of the driver that time, Honda installed a roll cage in the cabin. And to reduce some of its weight, the infotainment system was pulled out together with the rear seats. Honda made it clear that the model they brought to Nürburging had “legal track-focused tires” and that it was a representative of the production specification.

Now that the Civic Type R holds the crown for this record, it has to watch its back because Renault’s Megane RS - another car that has its eye on lap times, will be introduced later this year. And who knows, maybe we’ll see it around Nürburging soon enough.

The high performance compact hatchback comes with a 2.0 liter turbocharged gasoline engine under its hood, producing 306 horsepower (228 kilowatts) and a 295 pound feet (400 Newton-metres) of torque. It has a six-speed manual transmission (with lower gear ratios to boost acceleration) that gives power to the front wheels.

Civic Type R is already scheduled for production this summer at the Swindon factory in the UK. As production models are made, the factory will ship these cars worldwide, including the United States for the first time ever. There still has been no word on its final price yet, but it will probably range mid-$30,000.

Following the production model’s debut at the 2017 Geneva Motor Show, the all-new Honda Civic Type R has set a new benchmark lap time for front-wheel drive cars at the Nürburgring Nordschleife. On 3 April 2017, a development car lapped the world-famous circuit in 7 minutes 43.8 seconds.

The lap time was achieved during the final phase of the model’s testing regime, on a dry track with an optimum ambient temperature for the best tyre and powertrain performance. The new time represents an improvement of nearly seven seconds compared to the model’s predecessor.

The new Civic Type R was part of the all-new tenth-generation Civic’s development programme – the largest in Honda’s history – and was engineered to deliver the most rewarding drive in the hot hatch segment, both on road and on the race track.

The high-rigidity body frame of the all-new Civic Type R is 16kg lighter than the previous model’s, with a torsional stiffness improvement of 38%, which provides significant benefits to steering response and cornering stability. New multi-link rear suspension enhances stability under braking and reduces the total roll movement of the car, enabling later braking into corners and helping to achieve higher cornering speeds during the lap.

Ryuichi Kijima is the lead chassis engineer for the Honda Civic Type R. He explains where the all-new model shows the most significant improvements around the Nürburgring compared to the previous generation car.

“The cornering speed achieved in the new Type R is higher because the car features a wider track and tyres, a longer wheelbase, new multi-link suspension in the rear and optimised aerodynamics that improves stability, ” said Kijima-san. “For example, drivers typically enter the corner after Metzgesfeld at around 150 km/h. Even at this medium-speed corner, the speed is around 10 km/h higher due to the new Type R’s excellent stability. So, with improved cornering performance, we can increase the speed throughout the lap, helping the new Type R to achieve a much quicker lap time.”

The development car that achieved the lap time was technically representative of production specification. A full floating roll cage was installed for safety reasons, but its presence did not provide any additional rigidity to the body frame. The extra weight of the cage was compensated for by the temporary removal of the infotainment system and rear seats. The car was using road legal track-focused tyres.

Production of the new Civic Type R will begin in summer 2017 at Honda of the UK Manufacturing (HUM) in Swindon – the global manufacturing hub for the tenth generation Civic hatchback. The Type R will be exported across Europe and to other markets around the world, including Japan and the US. Its arrival in North America will mark the first time that any Honda-badged Type R has been officially sold there.