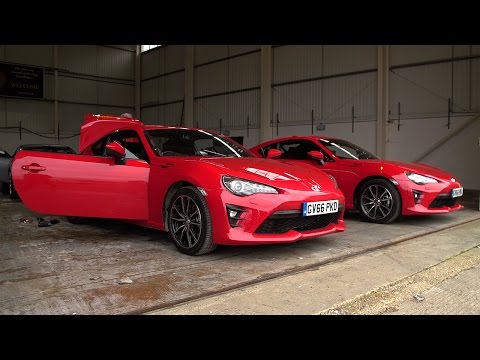 Top Gear has revealed that for its “Stars in a Reasonably Fast Car” segment, it will now be using a slightly enhanced Toyota GT86, which in the U.S. market is called simply as the 86.

This segment may be familiar to fans under its previous title of “Star in a Reasonably-Priced Car.” In this part of the show, celebrity guests are given the chance to go behind the wheel of a particular model and run the Dunsfold Test Track with the goal of getting the fastest record time. The first vehicle to be part of this segment was the Suzuki Liana with Ellen MacArthur setting the record at 1:46.7. Later this was changed to the Chevrolet Lacetti with the record being achieved and held by Jay Kay with a time of 1:45.83. Then there is also the Kia Cee'd whose record time of 1:42.1 was attained by none other than Friends star and now Top Gear host Matt LeBlanc.

With the GT86, there is some expectation that viewers will get to see more exciting runs. For this version, Toyota turned it into a racing unit by first taking out some of its carpet and even removing the backseat. A racing bucket was then added and a roll cage was even installed. Despite these changes, many are saying that it may not have affected the weight that much.

Powering the GT86 is the same unit in the base version which is the four-cylinder 2.0-liter unit that is paired to a manual six-speed transmission.

One issue that the show needs to address though is with regards to its Test Track located at Dunsfold Aerodrome. In December of last year, owners of the land revealed that the local government had finally given the approval for the construction of around 1,800 homes in the area. The owners were also allowed to use the land as part of the planned expansion of the Dunsfold Business Park. There is no word yet on when the actual construction will start so we may still get to view celebrities doing their run.

It does not change the fact though the viewers and enthusiasts alike are excited to see how the modified GT86 performs. In a review by Jake Holmes of Motor1, he said that as the speed and the angle increases, the weight of the steering goes up slowly without going off-center. He added that when going on corners, it delivers a stable set with just the right amount of roll and dive.

Though manufactured by Subaru, the Toyota GT86 is in fact the result of a collaboration between Toyota and Subaru. It is a 2+2 seats sports car that features a boxer engine, a front engine, and a rear-wheel drive.