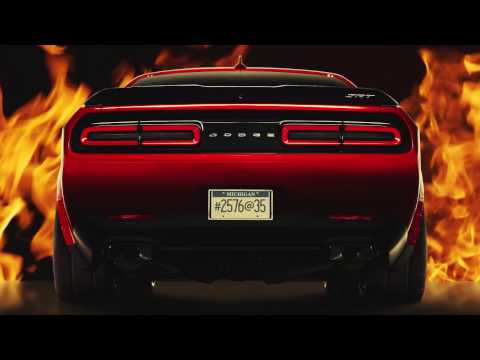 What is amazing about the latest teaser is the fact the wide drag radial tires – measuring 315 mm (around one foot) in width -- of the Dodge Challenger SRT Demon is fitted straight from the factory. These could be the widest front tires (315/40 Nitto NT05R tires) that have been installed on a production vehicle. Of course, if we are talking about tires of this width, the purpose would be maximizing as much traction from a drag launch. These tires are developed specially for the Dodge Challenger SRT Demon and boast of a new compound and specific tire construction.

Dodge will be releasing a total of 12 teaser videos before the model’s eventual launch at the New York International Auto Show in the third week of April 2017. Three videos have so far been released, and we expect juicier details to be unfurled in every succeeding clip. The last of these teaser clips will be shown as the Dodge Challenger SRT Demon is unveiled in New York City, just before the New York International Auto Show.