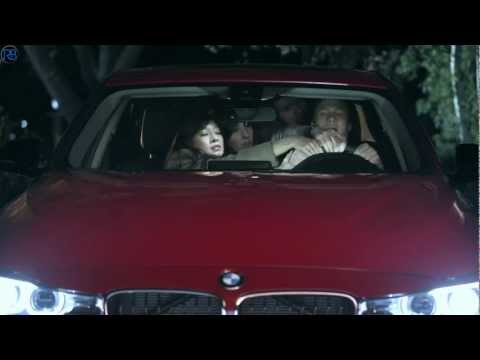 The new national marketing campaign for the all-new BMW 3 Series Sedan, which starts selling on February 11, includes a lineup of six playful digital shorts. BMW of North America said that two of these are set to be seen during Super Bowl XLVI in regions throughout the U.S. The first is entitled “The Big Grab,” which shows how freezing people inside the car get saved by a heated steering wheel.

This would air in the New York Tri-State area. The second has the title: “The Close Call,” which will air in the Southern California-Los Angeles, Atlanta and Houston areas.

The national program is created by Kirschenbaum, Bond, Senecal + Partners, which came up with a series of six 15 and 30 second digital shorts. These take a playful turn at demonstrating several of its numerous new technologies that were incorporated into the all-new BMW 3 Series. For instance, “The Perfect Seat” shows how driver’s seat memory can enable a couple who are opposites when it comes to size to share the driver’s seat.

Starting February 7, a few of BMW’s digital shorts will start to air on sites like NBC.com, ABC.com and Hulu. These Super Bowl ad spots could be viewed at www.youtube.com/bmwusa. Dan Creed, Vice President of Marketing, BMW of North America, said that the BMW 3 Series is the “global benchmark for a sports sedan.”

He believes that with these digital shorts, the public will be able to focus on the innovations on the 3 Series that set the standards for other automakers.

As a renowned pioneer in the compact sports sedan category, the BMW 3-Series Sedan is an industry icon, exuding the world-famous BMW characteristics of superb aesthetics, excellent design dynamics and impressive sporting capabilities. Now, let us welcome the new sixth generation BMW 3-Series from the league-leader in the premium vehicle segment.

With sleek and flowing lines, the new 3-Series still possesses its famous, jaw-dropping, sporty look and elegantly majestic proportions, even though it has undergone an increase in overall dimensions compared to its predecessor. Furthermore, it still retains the esteemed exterior features typically found in previous generations such as an aerodynamic, swept-back bonnet, an elongated wheelbase, a slightly protrusive front overhang and a distinctly configured BMW greenhouse.

The BMW 3-Series’ wedge-shaped profile, together with its wider track (an additional 37mm for the front and 47mm for the rear) emphatically contributes to its sporty and high-octane image. The car’s superbly-designed, multi-faceted front end emphasizes the new 3-Series’ wider stance, thereby contributing to its sportier and more active appearance. The broad and low version of the usually straight and forward-leaning BMW kidney grille highlights the smart and awesome low-profile stance of the new 3-Series.

Adding to the car’s attractively mean, lean and focused countenance are its LED accent lights which act like eyebrows for the car’s amazing corona-ringed headlights (for variants with xenon headlights). Interestingly, the headlights of the new 3-Series have been stretched to morph with the kidney grille, creating a single, smooth curvilinear design and further contributing to the 3-Series’ wide and low sporty stance.

Two perfectly positioned larger air intakes underneath the front fender, each aligned beneath the left and right headlights, have replaced the single, centrally-positioned air intake of its predecessor, and further enhance the car’s sporty look. Each of the new and larger air intakes is provided with secondary inlets located on the outer side of each intake. These aerodynamics-enhancing secondary inlets provide the “Air Curtain” which reduces drag on the front wheel housings at higher speeds, thereby contributing to an increased fuel efficiency for the BMW 3-Series.

A well-proportioned and masterfully designed kidney grille, together with its strikingly sleek headlights give the BMW 3-Series Sedan a breathtaking facade, worthy of a second look. Adding to the 3-Series Sedan’s unique look are the precisely contoured lines of its bonnet, giving the car a smart, low-profile yet powerfully sporty look when viewed from the front.

Woodcliff Lake, NJ – February 2, 2012... BMW of North America today unveiled a series of six playful digital shorts as part of a new national advertising campaign in support of the launch of the all-new BMW 3 Series Sedan, which goes on sale February 11. Two of the shorts will also air in ads during Super Bowl XLVI: one entitled "The Big Grab," in the New York Tri-State area; and the second, "The Close Call," in the Southern California Los Angeles Region.

Created by Kirschenbaum, Bond, Senecal + Partners, the national program features a series of six 15 and 30 second digital shorts that playfully illustrate some of the many new technologies that have been integrated into the all-new BMW 3 Series. For example, "The Perfect Seat," illustrates how an odd couple - a driver and his much-taller companion - can share the driver's seat thanks to driver's seat memory.

Beginning Monday, February 7, select digital shorts will begin airing online at sites including NBC.com, ABC.com and Hulu. All of the content, including the Super Bowl spots "The Close Call" and "The Big Grab," where a heated steering wheel saves the day when a group of freezing friends hop into the car, can be viewed online at www.youtube.com/bmwusa.

"The BMW 3 Series is the global benchmark for a sports sedan," said Dan Creed, Vice President of Marketing, BMW of North America. "With these shorts, we turn a spotlight on the innovations that make the 3 Series the standard to which others aspire."