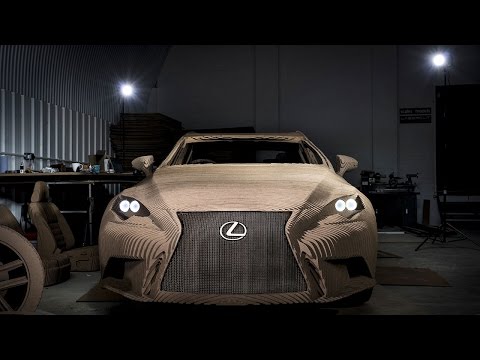 Lexus has long been known to make cars that display human craftsmanship skills. In celebration, the brand has come out with a new model: the Lexus Origami Car. An authentic replica of the IS saloon, it is a Lexus like it has never been seen before.

Instead of the usual plastic, glass, and sheet metal, the Origami Car is a life-size model that uses precision-cut cardboard as the main material. At the production line of Lexus, this skillfull group of people, also known as takumi, work to improve their dexterity skills through origami.

They learn how to fold paper and turn it an origami model cat. The catch is that they do it using their non-dominant hand. This talent is made use of in the making of the Origami Car but it has been taken to a much higher level.

At the same time, it is part of the expression of its global brand campaign called Creating Amazing. It has everything one wants in a car like a fitted interior, headlights, rolling wheels, and functioning doors. Since the electric motor has been mounted on an aluminium and steel frame, it is possible to actually drive the Origami Car.

Owing to the complexity and size of this project, this rather extraordinary undertaking was done by two UK-based companies LaserCut Works and Scales and Models. Both of these specialist companies have a wide and extensive experience when it comes to designing and creating architectural models, prototypes, and made-to-order commissions.

Ruben Marcos, founder and director of Scales and Models Company shared that the project was very demanding considering that it involved five people who undertook the digital designing, the modelling, laser cutting, and assembly. Marcos adds that they remain committed to manufacturing with the best possible quality, a trait shared with Lexus.

The whole team was in fact faced with a number of tough challenges during the creative process. Marcos shares that the wheels needed a lot of refining, and several attempts were made before the seats looked right.

However, once the team was able to see the physical pieces starting to take shape, it was easy to identify where improvements were needed, Marcos adds. Marcos concludes by saying that as with any process, some trial and error was involved but since the team had all the resources that it needed in-house, it was easier to finish the Origami Car.

For this project, Lexus gave the team a digital 3D model based on the IS. It was then divided into the different principal parts like the dashboard, seats, wheels, and main body. These parts were then rendered digitally in 10mm “slices.” This gave the team the two-dimensional profiles that it needed in order to laser-cut every one of the 1,700 10mm-thick cardboard sheets.

The sheets were provided by DS Smith. Since the entire assembly of the Origami Car was to be done by hand, the team gave each of the layers their very own reference number. This was to make sure that the pieces were assembled in the correct sequence.

To connect the pieces, the group used water-based/wood glue, which needed to set around 10 minutes after being applied. This was a critical step considering that once the glue had dried, changes could not be made anymore.

Accuracy in assembling the car was highly important. Marcos relates that with the project it felt as if they made their very own production line. While there was indeed a lot of repetition involved, the work was done with military precision, very similar to the effort made by teams that work on real Lexus cars, concludes Marcos.

There has never been a Lexus like it: sheet metal, glass and plastics have been set aside for the creation of a one-off life-size model crafted in precision-cut cardboard. The remarkable Lexus Origami Car is a faithful replica of the new IS saloon, produced as a celebration of the human craftsmanship skills that go into every car Lexus makes.

The skilled men and women – known as takumi – who work on the Lexus production lines, hone their dexterity skills by learning how to fold paper into an origami model cat, using only their non-dominant hand. The Origami Car takes the spirit of this talent to a far higher level, while also embracing the spirit of Lexus's Creating Amazing global brand campaign.

The Origami Car has a fully fitted interior, functioning doors, headlights and rolling wheels. Thanks to an electric motor mounted on its steel and aluminium frame, it can even be driven.
In terms of size and complexity, the project was an unprecedented undertaking for LaserCut Works and Scales and Models, UK-based specialist companies with extensive experience in the design and creation of prototypes, architectural models and bespoke commissions.

Ruben Marcos, Scales and Models Company founder and director explained: "This was a very demanding job, with five people involved in the digital design, modelling, laser cutting and assembly. Just like Lexus, we were committed to producing the best possible quality."

The creative process presented the team with a series of tough challenges: "The seats took a few attempts to get just right and the wheels required a lot of refining. Once we could see the physical pieces taking shape, we could identify where we needed to make improvements – as with anything, there were some elements of trial and error, but as we had all the resources we needed in-house, this made the changes easier to produce."

Lexus provided the team with a digital 3D model of the IS, which was then divided into a series of principal parts, such as the main body, dashboard, seats and wheels. These were then digitally rendered in 10mm "slices" to provide the two-dimensional profiles needed for the laser cutting of each of the 1,700 sheets of 10mm-thick of cardboard – supplied by packaging experts DS Smith. Each layer was given its own reference number to help ensure it was assembled in the right sequence and the entire assembly was done by hand. A water-based/wood glue was used, which had to be left to set for 10 minutes after each application. Accuracy was vital, as changes couldn't be made once the glue had dried. In all, the Origami Car took three months to build.

"In effect we created our own vehicle production line," said Ruben. "There was a lot of repetition in the process and we had to work with military precision, just like the teams that make the real Lexus cars."

This unique vehicle will be revealed to the public as a star attraction at the Grand Designs Live Show at the NEC in Birmingham, from 8 October.