Macan fails to pass the moose test, Porsche says it is only the Active Rollover Prevention [w/video] 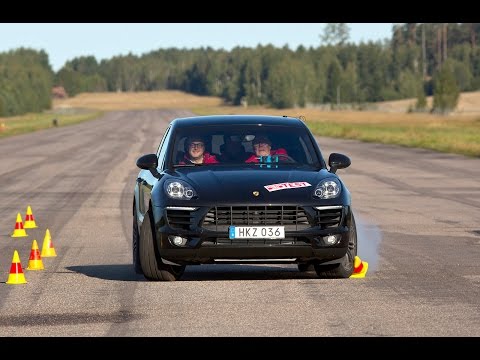 As you may know already, the moose test is a hard one for most of carmakers and when the vehicles fail it you know that there is a problem there. The latest vehicle to fail the test is the Porsche Macan, which behave quite strange in the moose test as the left front brake locked up in the middle of the maneuver. This is a disaster, especially from a vehicle built by Porsche.

The moose test was started at 70 km/h (43.5 mph), then the driver swerve the vehicle to the left, then sharply to the right. After the last maneuver the left front brake locks up and the vehicle continued straight ahead for a moment. The test was repeated several times and each time the Macan showed the same behavior.

Meanwhile, BMW X4 and the Range Rover Evoque showed passed the test successfully. According to the Swedish magazine, the tested model was a Macan S Diesel, which is powered by a 3.0-liter V6 turbo diesel engine that generates 254 hp (190 kW). This model is able to accelerate from 0 to 100 km/h (62 mph) in 6.3 seconds, while top speed is 230 km/h.

Porsche also replied the magazine when seeing how their vehicle performed and said that the brake intervention is deliberately applied to prevent the crossover from rolling over. The system, called Active Rollover Prevention (ARP) applies braking force to the front wheel at the outside of the bend down to the low slip range in order to avoid instable driving conditions such as oversteer, rollover or detachment of the tyre from the wheel.

Porsche says that the braking force is applied for a maximum of 300 milliseconds, depending of the driving situations.

We are still eager to find out if the Macan Turbo can pass the moose test as this is a performance-focused version of the German crossover.

Although there is nothing official, we are sure that Porsche is already working on a solution to fix the steering problem and we expect the Macan to pass the moose test soon.

As part of its essential design, the new Porsche Macan has an aggressive front end that features massive air intakes. On the Turbo version of the Macan, the apertures on the front extremes are fitted with stylistic details known as C-blades. These elements don’t accentuate the sporty appearance of the Macan Turbo, but also deliver a sophisticated aerodynamic response.

One of the spectacular design cues of the Macan is its large wraparound bonnet that encloses the headlights and extends down to the wheel arches. This bonnet and its precise lines flowing to the front end lend the Macan a wide and dynamic appearance. In addition, the smooth surface of the bonnet gives the Macan a clean front.

As viewed from the sides, the new Macan reveals a sharp profile defined by its sporty sloping roof line, broad sculpted wings as well as design lines flowing to the rear end. These design lines, the edges of its lateral glass surfaces (also known as window graphics), and shape of the D-pillar, pays tribute to the design of the Porsche 911.

In addition, the flanks of the new Macan also feature sideblades – which are essentially dynamically formed inserts – located at the bottom of the front and rear doors. Optionally available in different materials, these sideblades -- as well as front door entry guard – has a design that evokes the lower door seams of the 918 Spyder. Along with the sophisticated door handles, the entry guard makes the doors seem narrower and sides sportier and streamlined.