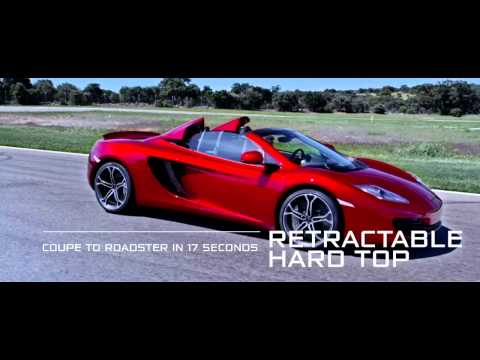 McLaren Automotive is featuring the new McLaren 12C Spider on a high quality short film at its official YouTube channel at youtube.com/mclarenautomotivetv. The start of the short film centers on a 12C Spider, finished in glorious Volcano Red, cruising in high speed on track and then proceeding to the winding mountain roads of Andalucía in Southern Spain.

The scenes on the short film underscore the 12C Spider’s positioning as a luxury convertible sports car that provides a dynamic mix of performance and usability. Early in the short film, the 12C Spider has its Retractable Hard Top lowered while it cruises, highlighting the model’s unique trait that rival sports cars don’t have.

The 12C Spider could completely retract its hard top in just less than 17 seconds. The short film features McLaren Automotive Test Driver and British Touring Car Championship star Mat Jackson who demonstrates why the carmaker believes it has developed a sports car that includes ‘open-top thrills’ in a set of technology packages inspired by its Formula 1 race cars.

For interested individuals as well sports car enthusiasts, McLaren Automotive’s interactive Online configurator, at configure.mclaren.com offers them a chance to personalize their desired 12C spider. Using the site, a prospective buyer may personalize a 12V Spider with a number of exterior and interior finishes and a range of wheel designs, as well as attractive carbon fibre appliqué.

Every detail on the 12C Spider serves a certain purpose. Nothing in its design and features is unneeded. The sports car is styled to convey all-out driving charm and presentation, with unrivaled proficiency.

Design Director Frank Stephenson said that as far as the McLaren is concerned, the model is intrinsically a race car. This characteristic is not present to other supercharged convertibles.

Stephenson added that the new model has a similar enduring design that is distinct of a 12C; however, a twist of glamour is brought by the open-top feature. The company did its best to retain the pure styling of the vehicle.

The model resembles an athletic coupe driven at the Le Mans in L.A. or in London. On the other hand, it looks just as good being driven on the Cote d'Azur or on Sunset Boulevard when the roof is pulled down.

The model was intended to have an RHT. The priority was set to integration of high strength and low weight. The priority is true to every aspect of the 12C.

Similar composite in the vehicle’s body is utilized in making the tonneau cover and the roof panels. The material is sturdy, lightweight and makes for an exquisite paint finish. The heated glass at the back put the finishing touches to the open-top roof design.

In less than 17 seconds, an automated device raises or pulls down the roof. The device can be prompted even at a maximum speed of 19 mph. The center panel inside the cabin holds the two-position switch which controls the device.