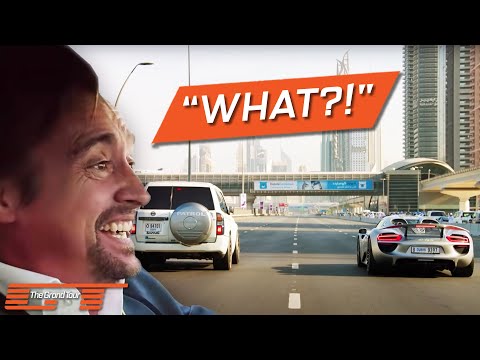 During the The Grand Tour’s final episode, host Richard Hammond did what few people expected him to do. He had a Porsche 918 Spyder race against what appears to be standard Nissan Patrol.

You probably know where we are going with this so it won’t be surprising then to know that when the race was done on the streets of Dubai, the Nissan Patrol dominated and left the Porsche 918 far behind. No wonder the internet is now calling it as the “918 Killer.”

To make this possible, F Performance Garage made changes to the engine but also ensured that the Patrol would have the same components as that of the GT-R. These included, among others, the steering wheel, subframe transmission, and suspension. Further, in order to be able to handle the extra power, F Performance also made sure to put in massive brakes and the sticky road race tires. Even the hood has functioning vents, clearly inspired by the GT-R. There is even a launch control to make sure that all the power generated is used.

However, aside from the additional power, the sound, and even small changes on the exterior, the Nissan Patrol remains to be a SUV, even in the way it drives. Indeed, you have to see the video to believe what we’re saying.

While it may appear that the Nissan Patrol did have the edge, it appears that there’s more to this matter. The Porsche 918 itself is creating some problems for the brand. In December 2016, Porsche issued a second recall for the 918. On the first time, the issue was related to seatbelts. This time around, it appears that the lower control arms on the front are at risk of cracking especially at the ball joint.

The affected models are part of the 2015 model year range and the brand said it will replace the arms for free. There is still no schedule though for when owners will get their actual notifications. Past versions have also faced recalls, one of which was due to electrical problems and required a chassis replacement.