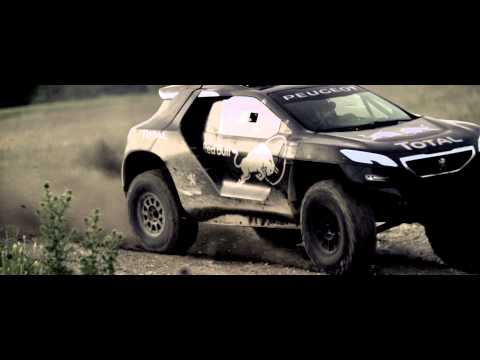 The Peugeot 2008 DKR made quite a buzz when it was revealed earlier this year and honestly we can’t wait to see how it performs at the 2015 Dakar Rally with just two driven wheels. Today, the French carmaker released further details and specs of its brand new monster and says that the DKR can practically climb vertical walls.

Of course, we don’t believe this, but we must admit that the video released by the company amazed us. According to Peugeot, the 2008 DKR is powered by a 3.0-liter V6 biturbo diesel delivering 340 hp and 800 Nm.

The engine is positioned mid-rear and offers a top speed of 200 km/h or 124 mph. Power is delivered to only two wheels via the longitudinally-mounted six-speed manual sequential gearbox. In addition, there is a longer suspension travel (460 mm instead of 250 mm) that enhances the ability over dunes and when soaking up uneven ground.

Technical project manager Jean-Christophe Pallier summarises them: “In motorsport, weight is counter to performance. However, in the case of cross-country rallying, two-wheel drive cars are allowed to be significantly lighter than 4x4s.”

“Fitting all of the vital assemblies into such a small space gave us quite a headache!” admits Pallier. “Small cars tend to perform more comfortably over twisty WRC-type stages, so this arrangement increases the potential of two-wheel drive cars in situations where the 4x4s tend to have the edge.”

After Team Peugeot-Total managed to awe the public with the looks of the new Peugeot 2008 DKR, the team is now unveiling the mechanicals of its latest rallying monster. Interestingly, while most participants in the 2015 Dakar Rally are 4x4 brutes, the Peugeot 2008 DKR is simply a two-wheel drive beast.

Challenging the Dakar Rally is only for the extremely capable as participants have to tackle mountains, canyons, salt deserts, dry river beds, fesh-fesh sands, rough terrain, dunes, and furnace-like temperatures. To overcome these challenges, Team Peugeot-Total opted to field a closed-cockpit car just like they did at the Le Mans 24 Hours. Peugeot Sport Director Bruno Famin remarked that this way, they are adopting an innovative concept.

Initially, the team had to decide whether to field a four-wheel drive or a two-wheel drive vehicle to a sporting event like cross-country rallying. Eventually, the team decided to field a two-wheel drive vehicle because of the interesting advantages of such configuration. Famin remarked that such a bold decision will allow Team Peugeot-Total to try to become the first team to claim Dakar victory with a diesel engine with power being sent to two wheels.

Since 4x4 vehicles have the inherent advantage in an event like the Dakar Rally, rules seek to even the playing field by allowing two-wheel drive vehicles to benefit from certain spec upgrades. As revealed by Technical project manager Jean-Christophe Pallier, cross-country rallying events allow two-wheel drive cars to be dramatically lighter than their 4x4 counterparts.

Two-wheel drive vehicles could also employ bigger wheels to allow them to manage and survive a number of pitfalls typically associated with the rallying terrain. Furthermore, two-wheel drive cars are allowed to have a minimal front overhang, thereby allowing the Peugeot 2008 DKR to practically climb vertical walls. Moreover, Pallier quipped that the 2008 DKR boasts of a longer suspension travel – from 250 mm to 460 mm – allowing it to be more able to tackle over dunes and uneven ground.

To note, a larger wheel size paves way for a system that allows the driver to remotely adjust the tire pressures from inside the cockpit, which could result to considerable time gain.

After grabbing public attention with the stunning new 2008 DKR, Team Peugeot-Total has finally lifted the lid on the inner workings of this muscular beast, which will take on the 4x4 brigade on the 2015 Dakar with just two driven wheels.

Dunes, mountains, dry river beds, canyons, furnace-like temperatures, salt deserts, rough terrain, fesh-fesh sand... These are just some of the joys that await the 2008 DKR on the next Dakar Rally. To tackle this tremendous challenge, Team Peugeot-Total has followed a very daring technical path: "Much like we did at the Le Mans 24 Hours by electing to run a closed-cockpit car, we decided to adopt an innovative concept," reveals Peugeot Sport Director Bruno Famin. "When it comes to cross-country rallying, the biggest question is whether to run with four-wheel-drive or just two. After a detailed study of the question, we decided to go for two-wheel drive transmission which presents a number of interesting benefits." This bold decision will enable the team to try to become the first to win the Dakar with two-wheel drive & diesel engine.

In order to balance out the chances of the different solutions, the rules in effect compensate the inherent advantage of 4x4 vehicles by allowing two-wheel-drive machinery to benefit from certain advantages. Technical project manager Jean-Christophe Pallier summarises them: "In motorsport, weight is counter to performance. However, in the case of cross-country rallying, two-wheel drive cars are allowed to be significantly lighter than 4x4s. They are also entitled to use bigger wheels which provide them with a certain advantage when it comes to coping with the many pitfalls associated with this type of terrain. On top of that, they allow us to minimise the front overhang. The 2008 DKR can practically climb vertical walls! And that's not all! Longer suspension travel – 460mm instead of 250mm – enhances its ability over dunes and when soaking up uneven ground. That's a key asset on an event like the Dakar!" Another advantage of the larger wheel size is a system that enables the tyre pressures to be adjusted remotely from inside the cockpit upon entering a zone of dunes – a tactic that could yield a gain of precious minutes!

In order to exploit these benefits fully, Peugeot Sport's engineers put their creativity to the test to come up with an extremely compact car. With its 340bhp, V6 twin-turbo diesel mid-rear engine, the 2008 DKR resembles a muscular feline ready to pounce and soak up obstacles. "Fitting all of the vital assemblies into such a small space gave us quite a headache!" admits Pallier. "Small cars tend to perform more comfortably over twisty WRC-type stages, so this arrangement increases the potential of two-wheel drive cars in situations where the 4x4s tend to have the edge."

Beyond the conviction – expressed by Red Bull for the last two years – that two-wheel-drive vehicles possess attractive qualities that shine through even across the most inhospitable of terrains, this technical approach also makes sense for the French manufacturer, as Bruno Famin explains: "Given that the production 2008 is a two-wheel-drive crossover equipped with Grip Control technology – which enables it to go just about anywhere – it is only right that the 2008 DKR derivative should similarly take on the challenges of the Dakar with just two-wheel-drive." So all that now remains is to let it off the leash!