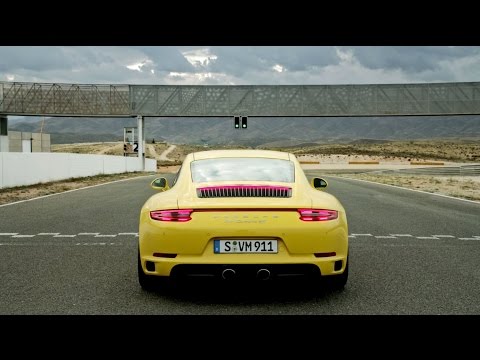 Porsche posted a promotion video on its YouTube channel showing Gordon Robertson driving the 911 Carrera. In the video, Robertson explains some of the new technology in the Type 991 while driving around corners in a British track. Robertson then hypes the Carrera S for around three minutes in high definition. The video also showed several rear shots of the car.

The upgraded Carrera S, meanwhile, runs on a 3.6-liter engine for 400 hp of output and 325 lb-ft of torque. It is priced at $97,350. The powertrain is connected to the rear wheels using either a seven-speed manual or a PDK transmission.

Porsche will also offer turbo, all-wheel-drive and targa variants. A cabriolet version was launched at the Detroit auto show.

The sixth-generation 911 is featured with stop/start technology and electronic power steering. The car also has the ability to decouple its engine when it begins to coast, returning 32 mpg on the highway, according to Robertson.

Porsche 911 Carrera’s design evolution is seen from every angle. When looking at the side, you can see there the new set of alloy wheels and distinctly shaped windscreen that define the new Carrera’s tough “personality”. This also includes the revamped front-end that is visibly wider and that comes with the new headlamps and larger air intakes on both sides. On the other hand, the narrower LED lights at the rear end are also part of the new evolution of style.

The wider spoiler enhances the new 911’s more powerful output along with other aerodynamic treatments. All these guarantee an impressive cd value and considerably lower lift for optimum efficiency.

Porsche’s Intelligent Performance is also applied on the new Carrera’s lightweight aluminium steel body. This, along with other functions and components that deliver equally outstanding driving efficiency and dynamics, clearly shows how Porsche has once again set a new level of standards when it comes to performance.

This new passenger vehicle is the first ever to come out with the seven-speed manual transmission. The first 6 gears offer excellent acceleration while the 7th gear (quasi overdrive) contributes to more fuel savings. Similarly, the new 911 Carrera is the first sports car from Porsche to come with the new Start/Stop technology. This unique new function can give as much as 0.6L/100km fuel savings according to the NEDC standards.

The same function is paired with any of the two transmissions available. Just the same, the engine and transmission’s thermal management system as well as that of the on-board electrical system recuperation allows 0.35L/100km more fuel savings. Finally, the new cooling design distributes air along the vents in the underbody for better performance and aerodynamics.

The sailing function on the other hand is another first for a sports vehicle. This technology goes with the optionally available PDK transmission that offers up to 1L of fuel savings for every 100km. So that means that when the driver steps out of the accelerator, the engine will automatically disengage from the transmission. The new 911 Carrera can go on even with an idle engine. This works very well at high speed driving where fuel economy is very essential.