Rob Dyrdek does a kick flip with the Chevrolet Sonic 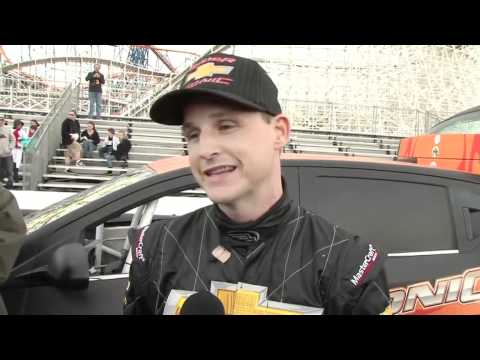 Chevrolet’s latest ad campaign for the Sonic that included a stunt by Rob Dyrdek (pro skateboarder and MTV personality) has gotten plenty of attention. It starts out quite interestingly with the new hatchback looking like a skydiver as it drives out of a plane with a parachute. The Chevy Sonic then rolls off a 100-foot tower but of course, it’s attached to a bungee cord.

A kick flip is what Drydek did using the car. This move consists of corkscrewing off a ramp and landing back on four wheels. Dyrdek can be seen at MTV's Fantasy Factory TV show, which features him and his friends just doing stunts at his warehouse.

To absorb the landing at the jump, the car was equipped with a roll cage, racing seatbelts and upgraded shocks. Its fuel tank was rebuilt to just hold a few gallons. Its battery was transferred inside the roll cage. Aside from these modifications, the Sonic was stock. To train for this stunt, Dyrdek worked with drivers from the International Stunt Association.

All Chevrolet Sonic’s 5-door and sedan models evoke the same refinement, stability and strength in every direction. The new Sonic has a wider stance with wheels-out proportions that spell performance. It also features extensive outlines around its body that leave an impression of endless motion.

One of the most aggressive designs is seen in the new fender flares and circular shaped headlights, which has obviously drawn its inspirations out of a motorcycle. These are further enhanced with Chevrolet’s iconic design cues such as the round taillights and dual element grille at the front.

Similarly, the usual low roofline, high beltline and endless lines wrapping all over its body define the new Chevrolet Sonic’s side profile. Once again, this makes the side mirrors barely visible at first glance. Interestingly, the sedan and 5-door are not exactly the same. The 5-door model for one comes with a taut, boxy shape that brings out the car’s more mature and sophisticated character. In fact, you would sometimes think it’s more of a three- door hatch back than a 5-door model because they have cleverly put the rear door handles along the C-pillars. Other than that, the rear end also sports the “motorcycle-ish” taillights for added visual appeal.

In designing the new Sonic, Chevrolet has truly put quality and attention to details amongst its top priority. The new Chevy has this beautifully designed chrome grille surrounds apart from the black honeycomb grille inserts in matte finish. They also included the new 17-inch alloy wheels to go with its new sporty identity.

For its interiors, the new Sonic boasts of a motorcycle themed instrument panel with clusters that comes with big, round analogue tachometer. All these are laid out within the LCD display, which also shows the large digital speedometer.

Other features include storage boxes at the doors as well as at the centre. Aside from the standard bucket seats at the front, the rear seats can be folded flat to make room for bigger objects. There are also the optionally available heated front seats to complete the new Chevrolet Sonic’s highly modern interiors.

Additionally, the mid instrument panel with tubular outboard outlets comes in two available colours. Whether you want the “brick” or the “dark titanium”, you can be sure that it blends flawlessly against the premium low-glass finishes at the upper part of the doors. To make it more interesting, they have employed the usual cobra head knobs on the automatic shifter while the manual shift knob now comes with a stunning chrome finish.