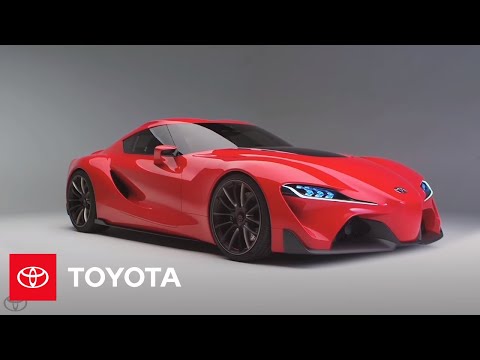 Toyota introduced the FT-1 Concept back in January at the 2014 Detroit Auto Show. Everyone was speechless by its impressive design and by the fact that this could the Supra successor we were waiting for. Today, the FT-1 Concept arrived at Pebble Beach and showed a new graphite exterior paint. The result is jaw-dropping and we are already drooling at this vehicle.

It definitely looks much better than the red version. In addition, it comes with saddle-colored leather interior. The new version of the FT-1 Concept was unveiled at the Gordon McCall’s Motorworks Revival gala held on California’s Monterey Peninsula.

For those who don’t know, the FT-1 Concept shows the new direction of Toyota Global Design and its curved exterior builds on Toyota’s sports coupe heritage dating back to the 2000GT, Celica, Supra, MR-2 and Scion FR-S.

The bad news is that Toyota didn’t announce any production plans yet, but we suspect that this vehicle will be produced. Still, if you want to drive it you have to know that the concept is available in the Gran Turismo 6 racing simulator, together with racing version called FT-1 Vision Gran Turismo.

“From the start of the FT-1 project, we wanted the driver to have a feeling of flow while at the wheel – to be able to focus on the road and nothing else,” said Sellene Lee, the Calty creative designer who proposed both color concepts. “In the color studio we help create the atmosphere of the vehicle, and our aim was to ensure everything supported the driver through efficient choices. The saddle leather maintains that same ‘in the zone’ driving intention, while bringing in a more premium feeling.”

The audacious FT-1 design symbolises the height of Calty's fourth decade of operation. Led by Vibrant Clarity, Toyota’s design language (a singular blend of emotive and practical aspects that create a more exhilarating and intense expression of design with Toyota individuality), the idea is a spiritual pace car for Toyota’s global design. The aim of this conceptual move is to create future product generations that connect better in an emotional way with Toyota's customer base worldwide.

Normally, Toyota design choices are a result of consent from a large stakeholder group. It falls under Akio Toyoda's specified charge to revitalise Toyota product lines with vitality, enthusiasm, and "Waku-Doki" (or, an obvious heart-throbbing feeling of excitement), a streamlining for the process for approvals. This new methodology intends to create vehicles that more deeply bond with consumers, producing a more rewarding ownership experience that matches the legendary Toyota reputation for excellence, trustworthiness, and dependability.

The sculpted-function design motif generates curled, strong, dramatic body shapes that seem to be formed by the wind. Openings, ducts, and intakes are components of exterior design helping to reinforce its track-ready feel with features of focused management of airflow. At higher velocities, a telescopic rear wing activates and leans forward, creating more downforce. The body's sportiness comes through in tight forms and expressive fender shapes in a blatantly red tone.

The front-engine rear-wheel drive arrangement places the cockpit far to the back within the wheelbase, improving distribution of weight. This design feature also assists in creating the traditional sportscar dimensions that are expected from an automobile positioned to overshadow even the most challenging tracks. The wraparound windscreen and side glass openings of the cockpit are a distinctive nod to the legendary Toyota 2000GT design.