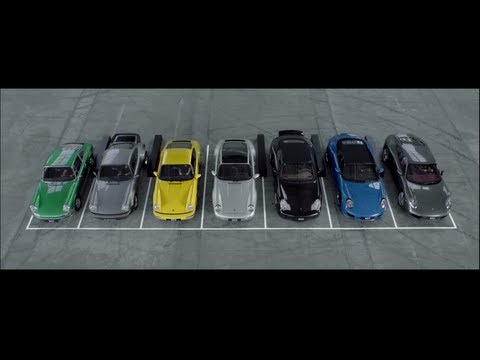 In celebration of the 50th anniversary celebration of the Porsche 911, a video and an online video game were released. Through these, Porsche is bringing together seven 911 generations as sweet music is played — the signature roar of the distinct engine of each year. In the video, we see each 911 being driven through an airport hangar then eventually landing on a piano key.

After all the cars are parked, the engines then burst into the Happy Birthday song.

The viewers get a reminder that: "Sometimes, you don't need a piano to create a symphony." A link is given to an online arcade game, where viewers push the numbers that correspond to the 911 piano keys.

A Porsche film is unlocked if enough points are achieved. Porsche has prepared several events to celebrate the sports car’s golden anniversary aside from the "Birthday Roar" video and game.

It presented the 50th Anniversary Edition at the 2013 Frankfurt Auto Show, where the 911 initially had its debut in 1963.

The new generation of the Porsche 911 Carrera represents a significant leap in the development of the carmaker’s vaunted sports car. For instance, around 90 percent of the sports car’s components are either redeveloped or redesigned. It also boasts of a new lightweight body as supported by new suspension systems. These, along with further drivetrain efficiencies, allow the new 911 Carrera to offer improved Porsche Intelligent Performance. This is well felt through higher levels of driving dynamics and practicality as well as up to 16 percent lower fuel consumption and carbon dioxide emissions.

People could easily get an idea of the stylistic evolution of the new 911 Carrera just by looking at it. Its newly styled flanks reveal a more convex windscreen and a set of larger alloy wheels. The revised front end, meanwhile, is now wider and is defined by new headlights and larger side air intakes. On the rear, the new Carrera is marked by narrower LED rear lights as well as by a wider, variably extending rear spoiler that – along with other aerodynamic optimizations – dramatically lowers aerodynamic lift while retaining a desirable coefficient of drag value.