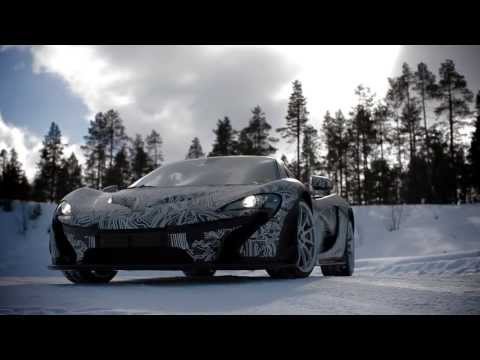 The development program for the McLaren P1 continues to progress as it comes to a close. There are just a few months to go before the first deliveries are made to only 375 consumers. McLaren is undergoing the work to guarantee that the P1 meets expectations of being the best driver’s car in the world on road and track.

As part of its tests for durability, the development team brought the McLaren P1 to the frozen landscapes of the Arctic Circle, in northern Sweden.

The car was tested in some of the toughest conditions on earth. This testing schedule is continuing, with XP prototypes being driven across the world. The newest model from McLaren Automotive will be seen as part of the scheduled activities at the 2013 Goodwood Festival of Speed.

The McLaren P1, as previously disclosed, now has the force of two very highly-efficient powerplants combined and offers an optimum mix in terms of day-to-day drivability, top speed, and superb throttle response.

The twin-turbo 3.8-liter V8 petrol engine is mid-mounted and has been significantly enhanced to have very effective electric motor and larger turbochargers resulting in a combined total output of 916 PS or 903 bhp with a 900 Nm maximum torque.

This makes sure that the rapid response is available through the revolution range, similar to that of a naturally aspirated engine. While the combined cycle has emissions measuring less than 200g/km, this is reduced to zero when electric drive mode is fully selected.

With the IPAS and DRS technologies derived from the Formula-1, this allows for a quick power boost and higher straight-line speed. Tires of the McLaren P1 come from the P Zero Corsas, which has been specially developed by Pirelli, McLaren’s technology partner.

The Pirelli team has been part of the development program of the McLaren P1 with the tire testing phase being integrated to the schedule as an important key performance component. The final construction and compound were developed and then optimized during the testing phase resulting in a finely tuned tire specific to handling characteristics and performance.

In order to harness the power that is produced by its twin powerplants, the McLaren P1 was constructed in a way that it offers a braking performance that is closely associated with that of a sport racing car or a GT3.

The system was developed by Akebono, McLaren’s Formula-1 partner, and it features a ceramic disc made of a new type carbon that has been used previously in space but never on a road car.

Unlike the more conventional carbon ceramic, the one being used in the McLaren P1 is not only stronger but is able to more effectively dissipate heat giving what is already considered as an efficient braking system incomparable cooling and stopping capability.

The system also boasts of weight that has been significantly reduced, as well as a bespoke ceramic layer that is able to coat the friction surfaces in order to have a more attractive mirrored finish.

With only a few months remaining until the first deliveries will be made to just 375 customers, the development programme for the McLaren P1™ continues to accelerate as it nears its end. This extensive work is being carried out to ensure that the McLaren P1™ delivers on the target of being 'the best driver's car in the world on road and track'...or a frozen lake, for that matter.

As part of durability testing, the development team recently travelled with the McLaren P1™ to the dramatic frozen landscapes of the Arctic Circle, in northern Sweden. Here, the car was put through its paces and tested to the extremes, in some of the most hostile and toughest conditions on the planet.

The testing schedule continues at pace, with XP prototypes running extensively across the globe, working to optimise the groundbreaking systems and technologies which have been borne of 50 years of race-winning knowledge and expertise.

The culmination of this testing and infamous McLaren attention to detail will be showcased over the summer, when the McLaren P1™ will publicly demonstrate the power available from the mid-mounted 3.8-litre twin-turbo V8 petrol engine and highly effective electric motor which generate 916PS, with a number of dynamic displays. As plans for the 50th anniversary celebrations for McLaren continue, it has also been confirmed that the latest model from McLaren Automotive will feature as part of the planned activities at this year's Goodwood Festival of Speed.

This latest stage in the rigorous testing process for the McLaren P1™ has been captured in the short film which can be viewed here – www.youtube.com/McLarenAutomotiveTV.

Following the company's global launch in 2010, McLaren Automotive launched the groundbreaking 12C and 12C Spider and, in keeping with its plan to introduce a new model each year, recently unveiled the McLaren P1™. The brand continues to expand, operating through a dedicated global network of retailers in every major automotive market.

McLaren Automotive Partners
To support the development, engineering and manufacture of its range of innovative and highly acclaimed sports cars, McLaren Automotive has partnered with world leading companies to provide specialist expertise and technology. These include Akebono, AkzoNobel, ExxonMobil, Pirelli, SAP and TAG Heuer.

Designed for the track; Developed for the road
The connection between Formula 1 and road cars at McLaren is a natural process of experience, knowledge, principles and process transfer. Through the integration of 50 years of Formula 1 racing expertise and knowledge, and 20 years of heritage in producing landmark sports cars, McLaren Automotive designs, develops and builds the technologically advanced, groundbreaking and no compromise 12C, 12C Spider and McLaren P1™.

McLaren has pioneered the use of carbon fibre in vehicle production over the past 30 years, and since introducing a carbon chassis into racing and road cars with the 1981 McLaren MP4/1 and 1993 McLaren F1 respectively, McLaren has not built a car without a carbon fibre chassis.