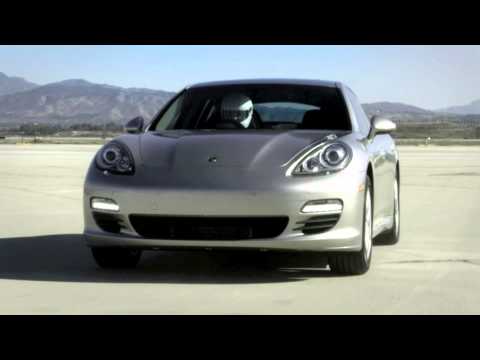 Infiniti has released a new promotional video that boldly pits itself against the Porsche Panamera S Hybrid as it attempts to prove that it has the fastest hybrid sedan on the market. The video begins with a Stig lookalike getting into the car and pulling up to the starting line. The 360-hp Infiniti M hybrid is visible in the Porsche’s reflection.

It’s later shown that the person driving the Infiniti is an average man wearing a helmet and no race suit.

A front view gives us the 380hp Porsche smoking the tires off the line only to discover that the shot was from the Infiniti’s side mirror. The M is named the fastest full hybrid in the world as it arrives at the finish line one car-length ahead. This claim is verified by a lawyer from the Guinness World Records. The 2012 M hybrid is powered by a 3.5-liter V6 engine that delivers 360hp and 258 lb-ft of torque.

Tests were conducted on the hybrid last February. The electric motor provides 199 lb-ft of torque from only1,770 rpm, allowing the M to get a good bite off the line. The Infiniti has a fuel economy rating of 32 mpg on the highway while the Panamera offers 30 mpg. The M hybrid has a weight of 4,129 pounds to achieve a power-to-weight ratio of 11.46 pounds/hp.

In comparison, the Panamera has a weight of 4,365 pounds, leading to a similar ratio of 11.48 pounds/hp. Accelerating from zero to 60 takes 5.7 seconds in the Porsche and “under six seconds” in the Infiniti. Furthermore, the Porsche sedan has a price tag of $95,975 (including destination charges) while the M35h is priced at only $54,595.

The new Porsche Panamera S Hybrid is laden with numerous audio and communication equipment as well as comfort functions. For instance, the Panamera’s command center features a seven-inch touch screen as well as the CDR-31 audio system. Customers may also avail of the optional Porsche Communication Management (PCM) – with navigation module – that includes a seven-inch high-resolution screen that should prove to be practical in displaying the 3D navigation map.

This PCM screen could be employed in split mode, in which two functions are displayed simultaneously -- like routing guidance list and the navigation map. Furthermore, the PCM comes with an array of functions like an integrated telephone module and Bluetooth connection of smartphones, as well as a voice control system to an electronic logbook.

Customers may also avail of an optional universal audio interface that could link devices like a USB medium or an iPod. They could also avail of Porsche Exclusive’s Porsche Rear Seat Entertainment that features two consoles integrated into the backrests of the front seats. These consoles reveal swiveling seven-inch TFT screens and integrated players as well as wireless infrared headphones.

These consoles are covered with the same leather found in the interior. In addition, customers may also avail of the optional 545-watt BOSE Surround Sound System that features a subwoofer integrated into the loading edge of the luggage compartment.

This layout allowed Porsche to have enough space for its traction battery and cooling system. Along with the PCM, the 545-watt BOSE Surround Sound System allows for an extensive digital 5.1 audio experience – both in stereo and in a surround mode – thanks to the patented BOSE Centerpoint technology. This audio system includes 14 loudspeakers, nine amplifier channels and a 160-watt active subwoofer with a Class D output.