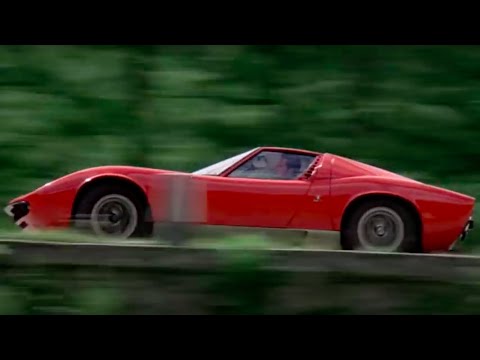 The 1968 Lamborghini Miura P400 is one of the few cars that have quite an interesting history. In addition to having an amazing style, it is powered by a 4.0-liter V12 engine and with 350 hp, it made a sound so powerful it could be heard as far as a mile away. Film fans will likely remember seeing the Miura P400 in “The Italian Job” particularly in the opening scene with an orange version coasting through an alpine highway.

For the super fans and those who can afford it, the good news is that the same Miura P400 in the film is now being put on sale. The original Miura P400 had the 3568 chassis number with the Arancio Miura finish and interior in Pelle Bianco leather.

The Miura P400 is the second in a series that is characterized by a thicker chassis thus having less flexibility. It also has 11,806 miles on it. In 2011, not only was its engine block replaced but the paint job was renewed as well.

Even then, it is still guaranteed to ensure that whatever memories you have are still there. The original 1968 Miura was powered with the brand's own V12 engine, albeit its 3.9-liter version which could deliver 350 hp (260 kW).

From the years 1966 to 1969, Lamborghini manufactured 275 units. This was considered a success despite the $20,000 price, which today is equivalent to about $114,000. In addition the engine of the original Miura had the gearbox located in the sump which also shares engine oil for its lubrication.

The disadvantage then was that there was always a need to change the oil. Another problem of the early versions was that it had a tendency to be a fire hazard. This was because the company decided to utilize the 40 IDL 3C1 Weber carburetors which were better suited for racing rather than road use.

What happens is that while the car is idling, the portion that is above throttle becomes filled with fuel. Thus when the car starts to accelerate, there was risk of igniting that area. It was eventually solved by one of the company's engineers by modifying the carburetors to have a fuel-return.

To be fair, Ferrari also faced a similar problem with some of their cars as they used the same carburetors and also used Lamborghini's solution. Another feature of the Miura P400 was that its fuel tank was placed at the front resulting in the car having less weight as more fuel is used.

This meant that when the car reached at least 150 mph, it became more difficult to handle. There is also the fact that when the doors are opened it looked like the horns of a bull, not surprising as the brand's logo is a bull.