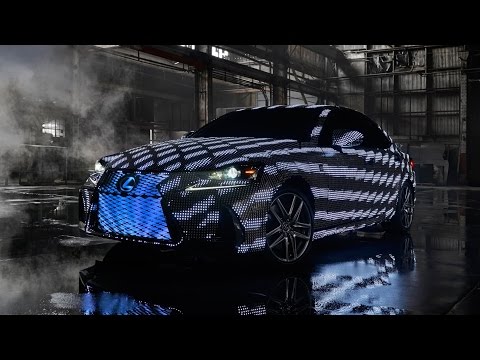 As if stuffing the trunk of the Lexus IS 300 with 43 chili sauce bottles aren’t good enough, Lexus is at it again by dressing up an IS sedan for yet another “dramatic entrance.”

If you see a car draped in colourful lights, well, you aren’t imagining things. It’s the new Lexus IS with 41,999 programmable LEDs. For those who want to catch a glimpse of what the “Lit IS” looks like, Lexus featured the spectacular custom vehicle in Dua Lipa’s “Be the One” music video.

Lexus GM for product and consumer marketing Brian Bolain considers it a perfect place to launch the LIT IS and the 2017 Lexus IS. Since Lexus seeks to highlight their amazing design and technology, there’s no better way to do it than to turn on the lights.

Today’s hip and cool crowd will surely notice this rare collaboration between Vevo and Lexus. The car on the video is capable of producing up to 175,000 lumens when fully lit. Vevo’s music video showcases the 2017 Lexus IS as a unique masterpiece together with one of UK’s most talented music artists of this generation.

Vevo is a music and entertainment platform with up to 18 billion views every month while Lexus as we all know has ventured beyond its successful vehicle line-up. The music video features Dua Lipa and Divergent star Ansel Elgort in a bizarre storyline. The LED on the other hand features various degrees of illumination under “Gesture”, “Music Viz” and “Attract” programmable modes.

When set in “Gesture” mode, the program displays a certain pattern based on the hand movement of the user. The Music Viz instead moves to the beat of the song while colourful graphics appear when the “Attract” mode is chosen otherwise.

Lexus’ 2017 IS is pitted against Mercedes-Benz’s C-Class, BMW’s 3-Series and Audi’s A4 sedans. The current model just had its mid-cycle refresh and is now offered in 255hp or 306 hp 3.5 litres V6 as well as the 241hp 2.0 litre turbocharged four-cylinder engines.

Among its new features are a distinct lower fascia, new headlights and a much aggressive spindle grille design. The 2017 IS’ rear section now boasts a rectangular chrome tailpipes along with its new taillights.

To highlight the impressive styling of the new 2017 IS, Lexus today unveiled a custom vehicle wrapped in 41,999 programmable LEDs that turn the car into a screen capable of broadcasting dynamic graphics and videos. The car, which is designed to send a bold signal, is featured in UK chart-topping artist Dua Lipa’s new music video for her hit song “Be the One.” The first-of-its-kind collaboration pairs Dua Lipa’s powerful vocals with an ethereal storyline, featuring the vehicle as a character and visual anchor in a story that also casts actor Ansel Elgort (“Divergent”; “The Fault in Our Stars”) as Dua's former love.

This unique collaboration between Lexus and Vevo showcases the Lexus IS as an incredible work of art, technology and design through the lens of a music video. The 2017 IS has a commanding design and Lexus wanted to amplify those styling cues like never before. To create the LIT IS, Lexus used hand-applied LEDs to turn the vehicle into an eye-catching screen. In addition to broadcasting graphics, the LIT IS can also generate colorful, mesmerizing animations in response to gestures and music. Through this responsive technology and the animations, an expressive car was turned into an actual vehicle for expression, and the concept for a new Dua Lipa music video was born.

“A car as visually striking as the LIT IS required an equally dramatic debut,” said Brian Bolain, Lexus general manager of product and consumer marketing. “A music video was a perfect place to launch the LIT IS and working with Dua Lipa allowed the concept to come to life, putting a spotlight on the Lexus IS in an entirely new way.”