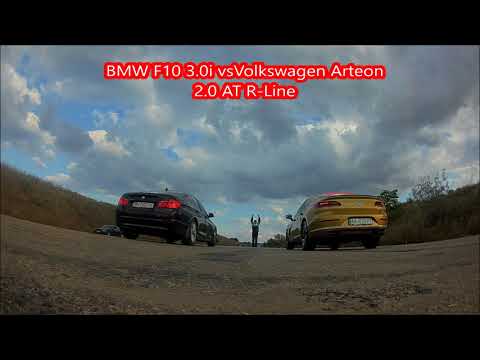 Drag races usually pit one vehicle against another to see which of them would cross the finish line first. This has become a popular type of motor racing and some even do it to determine which of the two cars is quicker. Somehow, a certain drag race had a new Volkswagen Arteon go up against an older BMW 5-Series (F10), and the action is all recorded on video.

The video – created by Odessa Drag – saw action between a gold-colored automatic VW Arteon R-Line powered by a 2.0-liter engine and a black-finished BMW 5 Series (F10) powered by a 3.0-liter petrol mill. As the race starts, the golden VW Arteon managed to pull away quickly from its opponent. The video is quite noisy – as if there’s a horde of mosquitoes in the area – as it was captured through a flying drone. Based from the video, the drag race appears like it might have occurred in the city of Odessa in Ukraine, Eastern Europe.

Moreover, the race could have been between a BMW 523i and a 190-PS VW Arteon. Although the 523i holds the advantage in power, it being the heavier of the two vehicles means its acceleration from standstill wouldn’t be better than the 190-PS Arteon.