How do professional stunt men avoid speeding cars? They back flip over it! 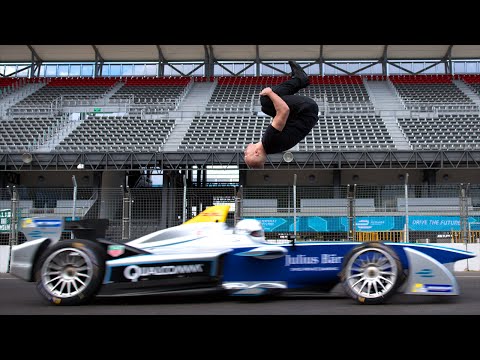 A lot of car stunts have gone viral over the internet ever since the start of this digital era. There are some flops and fake stunts, including that fake video of Kobe Bryant jumping over an Aston Martin DB9 which initially made the entire world freak out, but there has also been a couple of successful daring stunts that deserve a round of applause and standing ovation. No, scratch that.

A couple of these successful attempts of utilizing a car and a live human body all deserve a world record. There have been several attempts to wow the world with out of this world stunts but just recently, Hollywood stunt man Damien Walter have broken barriers with his one-of-a-kind stunt. The 34-year-old British daredevil and “Skyfall” double proposed a blind back flip stunt to Formula E that was staged at the Autodromo Hermanos Rodriguez in Mexico City.

The whole stunt goes like this: an electric powered Formula E race car driven by Whitton will zoom along at roughly 62 mph towards Walter and all he has to do to avoid being crushed is to do a back flip to avoid a bloody collision. Walter will have his back against the incoming Formula E race car which means that he has no idea when the car will come to him.

There have been lasers installed along the race track that let out an audible beep to signal that the race car is incoming. Walter on the other hand will have to watch a stop clock to help him in the timing of his back flip. The team had to work out the speed and distance that the car had to travel to be in sync with the time of Walter’s jump.

It took two days for Walter and his team to practice to make sure of his safety. Multiple side-by-side runs were done until they managed to get the perfect timing.

Correia says that if Walter jumps too early, he will hit the back of the car and if he forgets or is too late on the jump, then the stunt will be a bloody mess, and we mean that literally. It was unnerving as well as exciting especially for the team of trained professionals.

One mistake and it could blow the whole stunt and especially Walter. Fortunately, he was able to flip high in the air as the Formula E race car zoomed underneath him and was able to land safely on the other side. Loud cheers erupted from the crowd gathered at the race track as Walters and his team successfully (and safely) performed the stunt.

Well, what can you expect from Walters and Whitton? They’re both professional stuntmen who have had a few stints in action movies such as the Kingsman: The Secret Service, Skyfall and Assassin’s Creed.

As much as most of us would rather run away from a speeding car than to back flip over it, this successful back flip stunt made it look like it’s a natural thing. However, it is but very important to note that this stunt was done by professionals. So everyone, especially kids, are advised not to do this at home. Keep safe and drive safely everyone!