This Batmobile is one of most talked about cars in this year’s Gumball 3000! 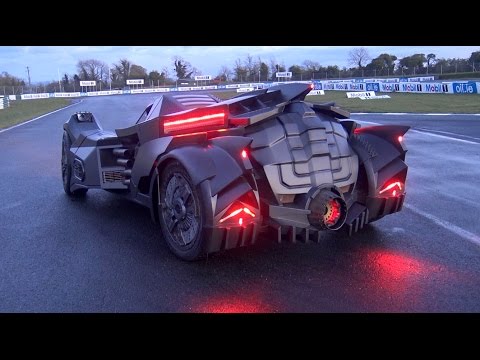 Big names in various walks of life in the international scene – from actors to international DJs to the best race car drivers – come together annually during the 3,000-mile British international celebrity motor rally widely known as the “Gumball 3000.” This one-of-a-kind motor sport competition was founded by Maximillion Cooper, son of a British artist and musician who found his true calling as a race car driver and racing enthusiast.

Cooper had raced for McLaren and Porsche, two of the biggest names in the industry. Finding his passion in the international racing scene and with a vision “to create an aspirational lifestyle brand” by combining art, popular culture and automobiles, Cooper founded the Gumball 3000 in May 1999.

The first Gumball 3000 was actually just a road-trip adventure across Europe with some of Cooper’s most influential friends. They hosted glamorous parties that were attended by big names in various industries. Since then, the Gumball 3000 has since been a very popular event especially to the elite and has graced international magazines such as GQ, Esquire and Vanity Fair – it has since been regarded as one of the must-do events in “Cool Britannia”.

The Gumball 3000 caters to the rich and famous mostly for the obvious reason that they are the only ones who can afford supercars and the occasional malfunctions/crashes. So imagine being a spectator of this once-a-year event, ogling over cars that not once would you get to drive in your lifetime.

There’s even more than the usual influx of some of the most famous people in the world that have made the Gumball 3000 a must-see event especially for car enthusiasts. It has played host to a variety of supercars – both the powerful and the most attention-grabbing ones. This year, a team of engineers has caught everyone’s attention by presenting to the public an out-of-the-comics version of a Lamborghini Gallardo.

Team Galag, led by an engineer who has spent 15 years of his career in the popular racing circuit in Koenigsegg, has produced a car that will leave each of those who witnesses its monstrosity at a loss for words. The team has produced a real-life version of the Batmobile, straight out from the comic books and movies with a few modifications. The car’s body is made of 90% carbon fiber and its housing is equipped with mirrors on the outside and fitted with cameras on the left, right and rear of the vehicle to give its driver a better view of the outside world. If that doesn’t look intimidating enough, wait ‘til you hear it roar on a racing circuit. The car is based on a Lamborghini Gallardo, sporting the same 5.2-liter V10 engine.

At a test run in a race circuit in Ireland, this batmobile by Team Galag has definitely left spectators tongue-tied – which is actually Gumball 3000’s goal, right? Well, it is definitely a show stopper and has been one of the most talked about cars this year. Because when you’re rich and famous with plenty of time on your hands, your childhood dream can be a reality.