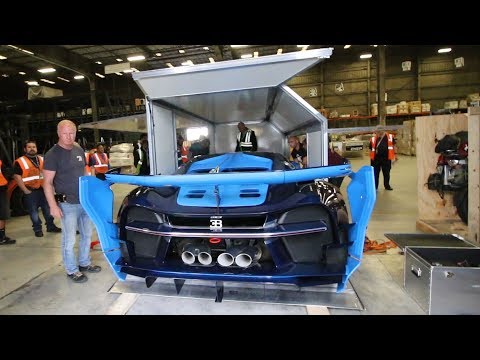 Are you a hypercar enthusiast? If you are, then this story might catch your attention. If you have unlimited cash to burn, one of the most expensive cars you could bring home is a Bugatti Veyron. Or the Bugatti Chiron might be more to your liking. But don’t forget that there is also the extremely rare Vision GT.

Because of how incredible this hypercar is, we just have to show you a video of its delivery to a collector based in Los Angeles. This one-off Bugatti Vision Gran Turismo first made its appearance in 2015. From looking at its design, you would be able to tell that it got some of its inspiration from the Bugatti Type 57G, which is a two-time Le Mans 24 Hour winner. Under the hood of this super rare model is a W16 engine that produces an impressive 1,650 horsepower (1,230 kilowatts) and 1,165 pound-feet (1,230 kilowatts) of torque.

The very first owner of this Bugatti Vision Gran Turismo was Saudi Arabian Prince Badr bin Saud. He then sold it to the new owner who is based in LA. As you heard in the video, this is the one and only Bugatti Vision GT that has reached the US soil, and it will be sitting in its new owner’s garage alongside a Porsche P1, Ferrari LaFerrari and a one-of-twenty Lamborghini Centenario. Undeniably, the Vision GT comes with stunning bodywork and a dramatic engine, as well as a few other outstanding features to take note of.

Having the Bugatti Vision Gran Turismo serviced will cost you about $20,000 - believe it or not. Yes, you could already buy a brand new car with that amount of money. With $20,000, your GT will get an oil change, a clean windshield, and a tire pressure check - that’s all. The one-off model sits on a new set of extremely rare and expensive (at $93,000 or 80,000 euros) Michigan racing slicks, as there are only two sets in the world. Inside the car, there are three remotes that control things like the headlights, and interior lighting, steering wheel lights, ride height, and the rear wing. It also comes with an antenna, and a manual.

But if the new owner can afford this one-off Bugatti Vision GT at around $5.16 million to add to his million dollar hypercar collection, we are quite certain that a tire change and an extra $20,000 bill is nothing to him.

As you can see in the video, the men who transported the vehicles into the new owner’s personal showroom took really good care of the car. You wouldn’t want to scratch a car this exquisite.