The Cold (and snow) Never Bothered This Ferrari F40 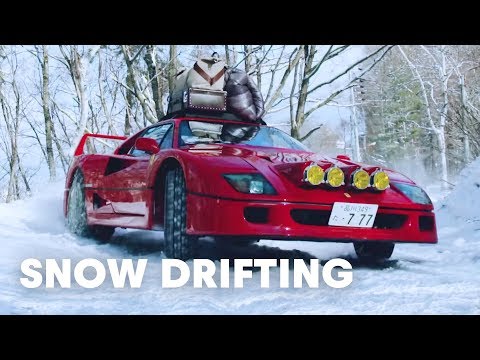 While some of us might be cowering and hibernating during the winter season, there are people from Red Bull who thought it fun to drive a Ferrari F40 in the snow-covered mountains of Japan. Yes, you read that right. Apparently, Red Bull thought it was okay to drive up to the mountains in one cold winter day in Japan and drift through an ice covered mountain resort.

Geared up with tire chains and a DOHC 32-valve twin-turbocharged intercooled V8, Red Bull’s Ferrari F40 was not one to succumb to the winter cold. In the video called “A Day In The Life”, the Ferrari F40 is seen driven with incredible driving skills as it was drifting through the snow as if it’s just running on dry land.

Imagine being in the same vehicle and praying for dear life so that the vehicle will not end up sliding down the cliff. Driving in the snow is itself cringe worthy, what more drifting and maneuvering itself through the snowy mountains of Japan. We’ll have to commend its driver Takeshi Kimura for such astounding skills and control.

Now here’s a recap of how awesome the F40 already is and why the Red Bull advertisement made it even better. As we said earlier, the mid-engine rear-wheel drive two-seater two-door coupe is powered by a turbocharged V8 engine. It can produce up to 478 horsepower and 424 lb.-ft. of torque. It has a top speed of 197 mph and a recorded acceleration of 4.2-second 0 to 60 miles per hour.

The F40 is able to cover a standing quarter mile in only 12.1 seconds at 122 mph. It is most likely because of its recorded braking capability of 218 ft from 70 to 0 mph that the F40 in Red Bull’s advertisement was able to execute control even through the snow.

Moreover, it also has a roadholding capability of 300 ft in diameter. It’s amazing how much more Porsche’s arsenal of sports cars have in store for us. And it’s also remarkable how an old model like the F40 is still capable of doing stunts especially in a snow-covered track. However, one must always practice caution, especially among non-professional race car drivers and drifting experts.

The advertisement should’ve gone well with a “don’t do this at home” warning especially for those who are now plotting their very own version of the video. Because the cold never bothered this Ferrari F40, bet you a few bucks Elsa’s out to get one of these bad-ass rides to use for drifting in her ice castle.