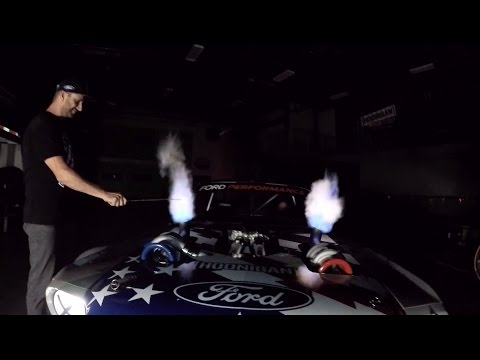 In 2014, Ken Block unveiled his wild Hoonicorn at the Specialty Equipment Market Association show in Last Vegas. Derived from the 1965 Ford Mustang notchback pony car, the Hoonicorn was designed by RTR, Ken Block, Hoonigan and RTR. Its styling was inspired by current WRC cars at the time and DTM cars as well as toy cars from Block's younger days.

What is amazing about the Hoonicorn is the fact that it is powered by a 410 cubic-inch Roush Yates Ford V8 that delivers an astonishing 845 hp of max output and 720 lb.ft of torque. This vastly superior engine is mated to a six-speed Sadev SC90-24 all-wheel-drive transmission with a hydraulic handbrake system.

With 845 hp of output at work, the Hoonicorn could be considered as the ultimate drifting machine for Block and Gymkhana. It was the culmination of a two-year work.

Two years later, it seemed that Block and his team weren’t just satisfied with having 845 hp squeezed from the Hoonicorn’s engine. So, they decided to evolve the car itself.

Even until today, having 845 hp of output developed from the 6.7-liter V8 Roush Yates engine is not a joke. No one is laughing at it and truth is, so many are in awe over it. After all, seldom could we find a 1965 Ford Mustang delivering such power.

Essentially, the Hoonicorn v2.0 features the same engine, but the power is nearly double. Block commissioned engineers to squeeze more out of the engine. The solution they found was to pack the 6.7-liter V8 Roush Yates engine with a couple of custom turbochargers and crank up the boost to 21 psi.

Then they modified some of the engine’s hardware to allow it to burn methanol (since Hoonigan can’t use intercoolers) – which is why the evolved Hoonicorn’s hood-exiting dual exhausts spit some fire. The result is as already indicated – around 1,400 hp worth full-packed action.

According to Block, the Hoonicorn v2.0 is the most frightening thing he has ever driven, calling his ordeal a “mind-numbing, crazy experience.”

Of course, the hood of the evolved Hoonicorn now features colors of the American flag, similar to the one painted on 333-hp 1978 Ford Escort Mk2 RS unveiled a year ago. The Hoonicorn v2.0 rides of bespoke Toyo compound tires and comes with a new steering wheel.

Block remarked that they will soon release images and videos of the Hoonicorn v2.0 undergoing testing and will feature this Mustang in a new video project.