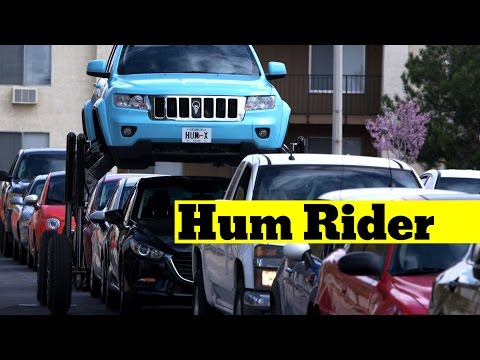 Finally, the perfect SUV for the busiest cities! Don’t we all just want to avoid driving when it’s rush hour? Well, Jeep has the perfect answer to your problem with their new Hum Rider. Sadly, the monster truck is not for sale. But trust me, you would not want one anyway.

Why? First of all, it weighs 8,500 pounds, that is probably the heaviest I’ve heard an SUV weigh. Its base frame is a fully customized hydraulic rig that lifts all that weight, and widens the stance so it can drive over smaller vehicles. It is purely hydraulic. In fact, the whole thing, including its movement is controlled by 300 feet of high-pressure lines. The truck does not even have a Jeep’s engine, and is powered by a single Honda generator instead. The only cool thing about this is probably the camera that is attached to the bottom of the truck, giving it a view of what’s underneath it, making sure it doesn’t smash smaller vehicles.

It might look cool for you Transformers fans, with its ability to extend its legs and do jaw-dropping tricks, but imagine the hassle of getting a clearance to drive a vehicle like that. And who are we kidding, American roads are packed with SUVs, and I mean ninety to one. Bear in mind, this car can only go over the tiniest subcompacts (like a Ford Fiesta), and it doesn’t even have that much allowance. To be honest, with its fragile looking legs, it might collapse if a rugged pickup or truck accidentally latches on one of its legs. I hope you’ve changed your mind about wanting to buy the Hum Rider after reading all this.

The Hum Rider that you saw in that online video was made for communications giant, Verizon, as an advertising stint. Using the Hum Rider as a literal metaphor to represent an upgrade of your current ride. Yes, an upgrade - the telecommunications company released a new automotive module they call Hum. A car expert that is supposed to make your car smarter & safer. The gadget plugs into the OBD port of most cars.

The Hum equipment can be purchased online or in-store at $29.99 only. Offering a wide range of features for a fee of $10 per month, it can help you with roadside assistance, vehicle diagnostics, vehicle tracking for lost/stolen cars, and a speed monitor that notifies you when to slow down - all of which can be accessed with the Hum app. It is a witty ad that people would remember though. Well done to the advertising and the production team behind this!