VIDEO: Jon Olsson attempts to go up Norway’s snowy slopes but with a Lamborghini Murcielago 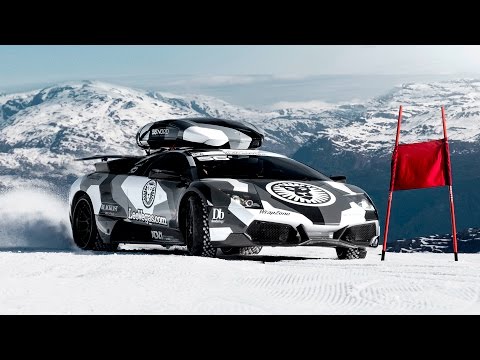 Jon Olsson is a distinguished personality especially in the world of skiing. At a very young age, he has already competed in alpine ski racing and by the age of 16, he has made a mark in the freestyle skiing division. He is the proprietor of several double flips such as the DJ flip which is a D-spin 720 that turns into a flatspin 540, the Hexo flip which is a switch double rodeo 1080, the Kangaroo flip which is a double flatspin 900, and the Tornado or a switch cork 720 into a flatspin 540. The Swedish skiing legend is very influential to both amateur and professional skiers. His thirst for adrenaline is infectious and shows even in activities that do not involve skiing.

Aside from skiing, Jon Olsson is also a well-known car enthusiast and product designer. He owns a vast collection of cars including an array of Audis and Lamborghinis. Being the designer that he is, Jon is very fond of “pimping” his rides. He has overseen the extensive modification of various cars including an RS6 and a Lamborghini Huracan. Believe us when we say that this guy doesn’t just bask in the glory of his creation and leave it sitting pretty in his garage because Jon Olsson is a Gumball 3000 alumnus and he likes to strut his stuff in the track.

In one of his Gumball 3000 expeditions, the Swedish skiing legend turned a 1,000-horsepower Audi RS6 Avant into the Abominable Snowman roaring through snow-covered roads. The body was made out of a hypercar-grade carbon fiber and its engines were upgraded to have 18-karat gold anodized turbochargers. It also has a custom Intrax Black Titan suspension as well as a Movit big brake kit and race exhaust system care of Milltek Sport. But this Jon Olsson designed RS6 met an unfortunate end in Amsterdam after being carnapped and burnt to the ground. Rest in peace RS6, you have served your master well.

Now aside from the Audi RS6, Olsson is also stripping down a Lamborghini Huracan with the help of MLT, a Swedish 3D visualization company. They scanned the Huracan’s body for the 3D building project while keeping the already amazing “drivability” of the standard Huracan. We’re still waiting for updates for this project but Olsson has faith that the 3D-bodied Huracan will be a potential show stopper.

In another attempt to wow the crowd and to get that adrenaline rush, Olsson just recently attempted to climb the snow-covered Norwegian mountain with his Lamborghini Murcielago. Geared with 325 mega mad max hyper spikes to help it climb the snowy trail, Olsson attempts to get the Mucielago up the ski slope. It took two weeks for Olsson to prep up for the climb. The pre-planning took much more time than the run itself – including taking the tape off the car (which Olsson does to prevent people from taking pictures of the car before show time). They had to transport the car up for about 3,000 kilometers to do the stunt. Too bad though the snow just wasn’t firm enough and summer is already fast approaching so Olsson’s team had to abandon the stunt.

With Jon Olsson’s reputation as a skiing legend, it looks like he’s comfortable with driving his cars up snowy roads and ski slopes. We’re hoping that he’d successfully get the Murcielago up the Norwegian mountains within the year. By then, this ice king should definitely change his name to Jon Snow (pun intended).