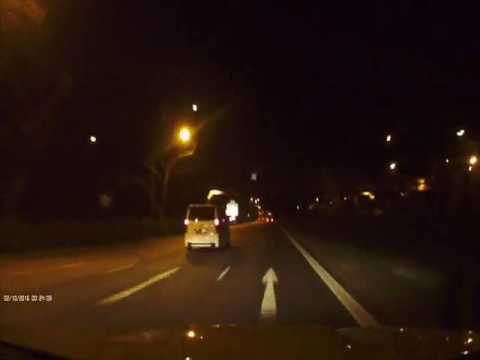 Traffic rules, warnings, signs, and what-nots are all posted, shared and advertised anywhere and everywhere. Even family members and friends constantly remind us to drive safe and to always practice defensive driving. But then there are daredevil wannabes and well, drivers who itch for the accelerator. We’ve all seen how these reckless drivers (and poor, unsuspecting passersby) end up through videos and footages, and it just doesn’t do the trick to scare them off.

The 45-year old was caught squeezing in between a car and a van and traveling at very high speeds. The car had a dashcam which caught the whole incident, the video immediately posted it on Facebook. It took only a split second for the Huracan Spyder to evade possible mishap and danger for both the van and the other car.

As seen on the video, the left lane was completely available and free of traffic but the driver opted to pull off that dangerous stunt leaving the passengers on the other car stunned. Thankfully, no one got hurt but local authorities were quick to step in and investigate. They used the video which have been shared multiple times over the internet to track down the Huracan’s owner and let him pay for his traffic delinquency.

The man was then brought into custody by the police on October 11 while his Lamborghini Huracan Spyder was also confiscated. The Huracan being towed away from the police station was caught on camera and also became viral and shared in various social media sites. So much for a publicity stunt, don’t you think?

Heng See Meng and his family was in the car with the dashcam that caught the said incident. He says that it was a very frightening experience for everyone who was in the car. He also adds that drivers must respect road discipline so that any kind of danger can be avoided by all other road users.

There are no details with regards to the charges that the Huracan’s driver will be facing and neither is there any more information on whether the driver remains in custody. This incident however teaches us of what dangers it may pose not only to the reckless driver but also to all other road users at the time of the incident. It also proves that the social media is a powerful instrument in helping local authorities, especially the police, especially when it comes to traffic offenses and reckless driving.