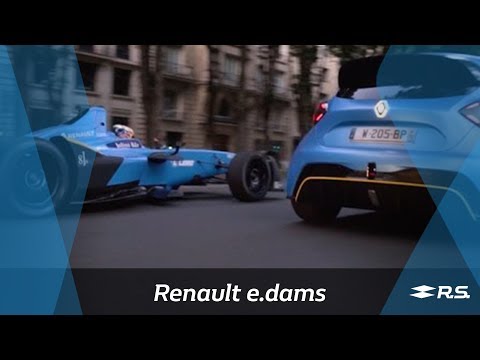 French multinational automobile manufacturer Renault has revealed its eDams team racer in preparation for the Formula E Paris ePrix along with the dashingly quick Zoe e-Sport Concept and a whole lot of production Zoe 40 units for retail purposes. Now we would like to wholly witness a race between the two high-powered electric vehicles.

Renault eDams team is a force to reckon with, as they’ve been leading the Formula E standings. The team celebrated the outstanding performance of its homestead by having a parade of their electric vehicles through the City of Light. Last Saturday in Paris, Sebastian Buemi earned his fifth win in six races of the current season of the Formula E. This means that he presently has a lead of 43 points in the electric racing series.

Leading the way of the procession are the Renault eDams R.S. 16 race car and the dapper Zoe e-Sport Concept in a video released by Renault. However, the drivers don’t follow a particular formation in the clip. But this doesn't mean that the Zoe e-Sport can't catch up with the R.S. 16. Renault confidently claimed that its conceptual hot hatch variant of the Zoe can leave you in the dust with its 62 miles per hour (100 km per hour) run, needing only 3.2 seconds to reach that coverage, and according to the French automaker, this performance can outrun the open wheel Formula E racer. That's a solid performance coming from a hatch.

The Zoe e-Sport Concept hatch was unveiled by the French automaker at the grand 2017 Geneva Motor Show, and it was revealed as a performance-direct variant of its electric vehicle. The swanky hatch boasts of a broader body than its stock, and its exterior panels are vested in carbon fiber. Renault also got rid of the rear seats. The said modification translates to the vehicle weighing around 3,086 lbs (1,400 kg), and its 992 lbs (450 kg) are due to its batteries.

Zoe e-Sport is fitted with not one but 2 electric motors, one found in each axle, and these motors can deliver an estimated 456 hP (340 kW) and 472 lb-ft (640 Newton-Meters) of pure torque. The swanky hatch also flaunts a sharp handler. The electric motor of the Zoe hatch will deliver an all-wheel drive traction, and its suspension features the Ohlins 4 way adjustable dampers. Its wide fenders can fit 20 inch wheels.

The French automaker is already releasing teasers regarding the next-in-line Zoe. It is disclosed that it has identical platform and electric motors as the descendant of the Nissan Leaf, which gives both the vehicle economies of scale for keeping the costs to a manageable budget. Now Nissan is also teasing us with the second gen Leaf.

Tomorrow the Renault eDams team will be the Championship leader for the ePrix race which will start at the Invalides at 4: 00 p.m. Drivers Sebastien Buemi and Nicolas Prost, respectively leader and 3rd in the world Formula e Championship, will be eager to shine in the colors of Renault in the French capital.