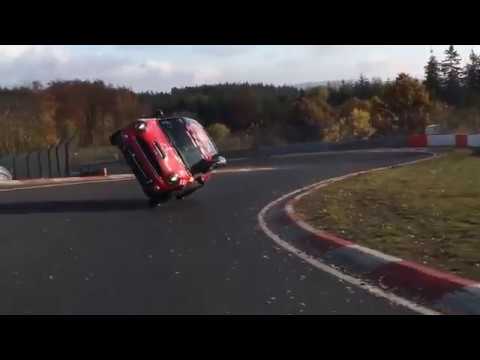 The Nurburgring has been regarded as a definitive one-lap test that has become a yardstick that measures the true worth of production cars. This 12.93-mile (20.81 kilometers) circuit -- technically a public road sans the speed limit – features sweeping curves, significant climbs and drops as well as variable surfaces, and a straightaway that stretches for more than a mile. Truly, Nurburgring is a challenging course where many have tried and continue to try setting new records in terms of distance and speed. And to try to set a new distance record while doing a two-wheeled side wheelie at Nurburgring is a very amazing feat indeed.

Already a multiple record holder, Han managed to complete the full lap (12.93 miles) of the Nordschleife. While the feat is pretty incredible, Han’s ability to focus on a road that features several elevation changes and a number of tight hairpins is equally astounding. The full attempt took around 45 minutes, which could set a new record for the slowest lap in the Nurburgring Nordschleife. That would mean Han might have set two new records at the same time.

Of course, Han’s stunt car is not your ordinary MINI Hatchback (R56 generation MINI Cooper S). Since the car is tilted over during the wheelie stunt, only the sidewalls of the tires remain in contact with the road. Unfortunately, the sidewalls of conventional tires wear too quickly during such attempt, thereby resulting to failure.

Because tires are usually a deciding factor in wheelie attempts, the ones fitted on Han’s stunt car were made from solid rubber and are designed for off-road use. In fact, hub adapters needed to be installed just to wrap the wheels with these rubber tires. Compared to conventional tires, solid rubber tires are strong and durable enough to last over a long distance – as proven by the new record. In addition, Han’s MINI Cooper S is fitted with a roll cage as well as a racing seat and harness. The rest are stock.

Interestingly, the record-breaking feat was streamed live on Facebook by the verified account of the Nurburgring, although the live broadcast was interrupted for a few seconds on two sections where reception was insufficient.