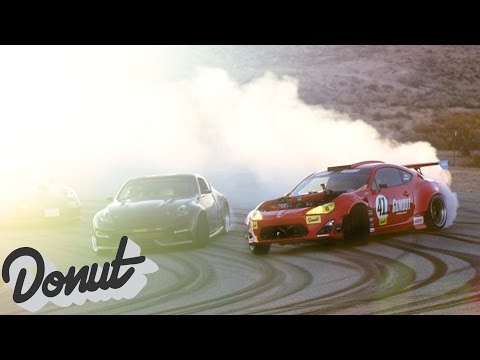 Toyota designed the GT86 as a well-balanced machine capable of executing even the most aggressive drifts. In fact, the Toyota GT86 – a.k.a. the Subaru BRZ and Scion FR-S – has been a favorite choice in street drifting and even in drifting championships. Drifting a Toyota GT86 is a lovely sight, but it isn’t that rare nowadays. But how about a GT86 powered by a 570-hp engine derived from the Ferrari 458 Italia? That would be mesmerizing to watch.

Well, we were recently enthralled by the drifting stunts executed using a very special GT86. Yes, this GT86 has a 4.5-liter V8 that also powers the Ferrari 458 Italia. Christened as the GT4586 (458 Italia plus GT86), this wonderfully powered drift machine is a project by professional drifter Ryan Tuerck, who collaborated with Gumout and Donut Media to swap the engine of the Toyota GT86 with that of the Ferrari 458 Italia.

Tuerck’s project includes shoehorning a Ferrari 4.5-liter V8 in place of the four-cylinder engine. This process was very tricky since the GT86 is a front-engine machine while the Ferrari 458 Italia is a mid-engine car. In addition, the GT86 isn’t built to be powered by the 4.5-liter V8 engine. To get the GT86 ready for the 458 V8 engine, Tuerck and partner Shawn Hudspeth of Huddy Motorsports stiffened its chassis and heavily altered its suspension geometry to get the steering angle sideways.

Moreover, the duo stripped the GT86 of its usual interior and installed a roll cage and bucket seats. Then Tuerck and Hudspeth mounted the V8 engine into the GT86 with the custom headers facing the other direction with forward-facing exhaust piping. The duo also positioned the intake manifolds higher than the GT86’s hood line, with the intakes sticking through the base of the windshield.

Bolt-in fender flares were also installed and several modifications were made to allow the GT4586 to pull off big slides. The now GT486 rides on gold-finished Fifteen52 Penta 18-inch three-piece wheels wrapped in Hankook RS3 tires measuring 245/40R18s on the front and 265/40R18s at the rear. This mean drift machine is fitted with large Brembo brakes and GT-R six-piston setup. A hydraulic handbrake from Nameless Performance was also installed.

Tuerck had this GT4586 displayed at the 2016 SEMA Show at the Las Vegas Convention Center in November. Many wished they could see it on the track. Thus, Tuerck granted that wish and – for the first time – drifted the GT4586 on the track. The location was the Willow Springs Raceway in California. It was a fascinating scene to watch; especially so when fellow professional drifter Chris Forsberg brought his Nissan 370Z Nismo to join Tuerck for some twin drift stunts on the track.