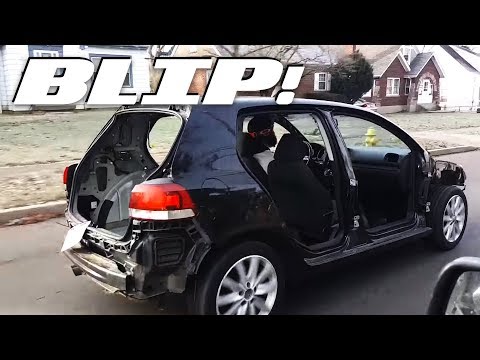 As the Dieselgate saga continues to be told, the stripping down chapter remains unfinished. Just very recently, the man who stripped down his 2010 Volkswagen Golf had his hatchback driven by an editor at Jalopnik. We don’t know exactly what the stunt that the man -- named Joe Mayer of Cincinnati – and Jalopnik wants to pull off, but it seems they are eager to show that the affected Golf subject to a buyback is indeed operable.

Here is how it started. Some owners were bragging about stripping down their Golf vehicles before taking them to VW for the buyback program, taking advantage of the term “operable” as defined by the program. Before going to his buyback appointment with Volkswagen, Mayer decided to strip down his 2010 VW Golf, took pictures of it and then posted it on his Instagram account.

His post caught the attention of Jalopnik, which then ran his own Diesel-gate strip-down story. Seeing the post, VW had a representative call Mayer and tell him that his appointment had been postponed. The representative didn’t say whether the carmaker would pay or would turn down Mayer for his stripped-down Golf. However, VW’s actions indicate its clear unwillingness to buy back a stripped-down vehicle. As Mayer said, the VW representative told him that stripping down of his Golf “wasn’t in the spirit of the buyback.”

VW hasn’t called Mayer back yet and the now infamous man is still hoping he could grab some money from the carmaker for a stripped-down car. After all, Mayer still believes that a stripped-down car isn’t against the terms of the buyback program. His logic is this: if VW is just going to scrap my vehicle after the buyback, it would be better if I take down some parts and return an almost scrapped car.

Now back to Mayer and the Jalopnik editor’s adventure. Before taking the ride, Mayer had to first install back the front passenger seat – one of the several parts he stripped. Then the joy ride began. The duo cruised around town like they were riding on a go-kart or something similar. They even encountered a police officer and some motorists who were game enough to take pictures of the car. As the Jalopnik editor says, these people were yelling at them not in disgust, but out of genuine curiosity.

However, making VW curious enough to buy back the stripped-down Golf is now far from happening. Judge Charles Breyer of the United States District Court for the Northern District of California – the same judge who approved an agreement settling leading the buyback program and is the person who has been presiding over the Dieselgate cases -- remarked that the purpose of the agreement was for the carmaker to accept these cars in the condition that they were in while being driven on the road. He noted that the purpose of the buyback agreement wasn’t to strip the cars. Well, this could be the so-called “spirit of the buyback” that VW was referring to. Judge Breyer also gave a warning to VW owners against stripping their cars.

It seems Mayer has to reinstall everything and put his Golf back to its pre-stripped condition before VW buys his car back.