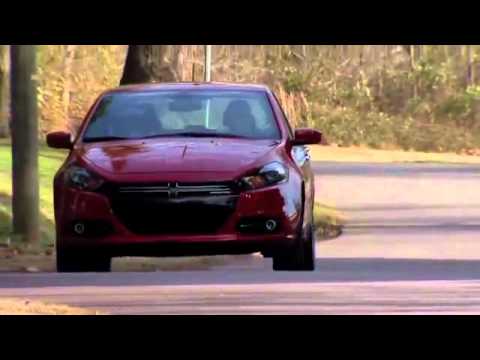 The 2012 Detroit Auto Show will open its doors this Monday but as expected, the premieres are starting to show up: ladies and gentlemen, this is the 2013 Dodge Dart! As you can see from the photos, we have two Darts models, the Limited (the white model) and the R/T (the red one), but details are not available for the moment.

The interior was also revealed and we must admit that the car looks really impressive.

Regarding the engines, we do know that the 2013 Dart will be available with three different powerplants: a 2.0-liter petrol engine, a 2.4-liter petrol engine known as Tigershark as well as the fuel efficient 1.4-liter turgocharged FIRE engine found on the 2012 Fiat 500 Abarth.

The engines will be mated to a 6-speed dual-clutch front-wheel-drive transmission. Next year, the 2013 Dart will be available with a more efficient 9-speed transmission coming from ZF Group. Chrysler expects the 2013 Dodge Dart to achieve a fuel consumption certified by EPA at 40 mpg or more by the end of the month.

2013 Dodge Dart’s architecture is based on the Alfa Romeo. And according to Joe Dehner, Chrysler Group Head of Design, the car had been a dream to design as it allows them to create an exterior that possessed great proportions and that conveyed a fun-to-drive look. You add in the new and sleek crosshair grille, the Charger-inspired racetrack tail lamps, and the piano black accents, and you have a performance-inspired style with attitude.

Speaking of the Dodge Dart’s architecture, more specifically called the Fiat Group-based CUS-wide (Compact U.S. Wide) architecture, it features long, wide, and low dimensions that ensure a coupe-like silhouette and a stable body-in and wheels-out stance. This CUS-wide platform allows for pushing the wheels out as far as the corners and accentuating the car’s fender formations, thereby creating that sense of stability that gave the company’s designers the opportunity to come up with dramatic sculpturing. The designers were able to visually stretch the car’s skin over its framework.

Dehner adds that in designing the new Dodge Dart, they were inspired by classic vehicles that had beautiful surface work and presence and that did not need any jewelry, lines, or unnecessary cladding that lead to a confusing visual effect.

Designers inserted a bit of a “Dodge attitude” once the Dart’s basic design was there, complete with curves and lines from every angle. The Dart boasts a split crosshair grille, which is unmistakably Dodge but with a sleek and modern look that seems like it is floating in the front fascia and that gives the car a full-width mask.

Meanwhile, the Dart’s rear view also features a full-width Charger-inspired racetrack taillamp that showcases 152 indirect glow LEDs, as well as class-exclusive dual exhausts that are mounted in the fascia. Meanwhile, the car’s front was redesigned for smooth airflow above, below, and around the car without compromising its engine cooling requirements or its styling. Additionally, the Dart’s lower radiator close-out panel can be seen below the front fascia, contributing to its lower front-end look and reducing drag while also allowing for a curb clearance of 8 inches.

Dodge designers clearly prioritized attention to detail as well as precision craftsmanship in every angle of the Dart. The car boasts of having well-crafted features that are otherwise typical of much more expensive types of vehicles. These features include standard laser-braised roof welds, standard projector headlamps, and high-quality metal DLO or Daylight Opening moldings in piano black finish.

Ford livens up its 2020 Explorer SUV lineup with new Hybrid and ST models
Ford Motor Co.’s Explorer family of sports utility vehicles has just been expanded with the arrival of two new models. The base, XLT, Limited and Platinum models of the Explorer...

Lexus LC Convertible Concept unveiled at 2019 Detroit Auto Show
It has been three years since Toyota’s luxury division, Lexus, unveiled the LC Coupe at the 2016 North American International Auto Show (NAIAS), which is also known as the Detroit...

Detroit-unveiled 2020 Shelby GT500 is the most powerful street-legal Ford so far
Ford surprised visitors at the 2019 North American International Auto Show (NAIAS) in Detroit, Michigan when it introduced the all-new 2020 Ford Mustang Shelby GT500, which it touts as the...
Facebook