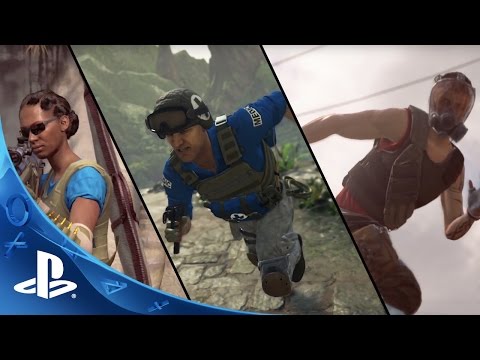 The PlayStation Blog got the opportunity to talk to Robert Cogburn, lead game designer for the Naughty Dog game Uncharted 4: A Thief’s End. He shared details about the features that players can look forward to in the multiplayer mode of the upcoming shooting game.

According to Cogburn, the new game’s multiplayer mode will introduce the concepts of the Sidekicks and the Mysticals, as well as present the grappling hook as a tool that can be used in combat.

The gameplay involves players trying to establish a “front,” or an area dominated by fire zones that will allow teams to battle the opposing force. Of course, this results to a near realistic experience as players battle through the intricately design maps.

Everything about combat can be found here – you can jump away when a grenade is thrown in your direction. You can peek behind walls and fire at unseen enemies just like you would in a real fire-fight! Uncharted 4’s multiplayer will test the mettle of your team.

Teamwork is definitely necessary in this mode. Without teamwork, “loose cannons” will be gunned down and eliminated by the opposing force within seconds of starting a match. Good coordination is needed so that you can provide support and help to each other as a team.

The multiplayer mode made its first appearance ever through a demo that was showcased at the Paris Games Week. While it was widely considered as an early build and could be very different from the final version, one can still see that there is a lot to look forward to in the multiplayer mode.

Experience a wave of nostalgia as various characters from the entire franchise can be seen smirking at you from the loading screen. Of course, it is only the tip of the figurative iceberg in terms of the features that can be expected from Uncharted 4’s multiplayer version.

A beta version will also be released on December 4th together with the Uncharted: The Nathan Drake Collection set. In addition, the multiplayer mode will be made available at the PlayStation Experience in San Francisco, California.

Dell Gaming Car pack brings Bugatti Chiron to Forza Motorsport 7
Turn 10 Studios, the developer of Forza Motorsport 7, has just released this month’s collection of downloadable cars for the gamers. This time, it is very different from last month’s...

Updates on Gran Turismo Sport will add 15 new free cars, 35 more cars to arrive in 1Q-2018.
A couple of weeks ago, the Gran Turismo Sport was launched on Sony’s PlayStation 4 console. In the game, players get to choose from 162 cars. But that’s almost nothing...

Gran Turismo Sport bundle comes with a real customized 2018 Mazda MX-5 Miata, 4K TV
One lucky gamer from Taiwan gets the chance to ultimately experience Gran Turismo Sport with the exclusive special edition that is priced at 1.398 Taiwanese dollars ($46,300). Why pay that...

Heads up to Fallout 4/Forza Motorsport 6 players: The Chryslus Rocket ’69 has arrived!

New games now available for PS Plus members on January 5

12 Xbox One Bundles up for grabs from Microsoft this Holiday