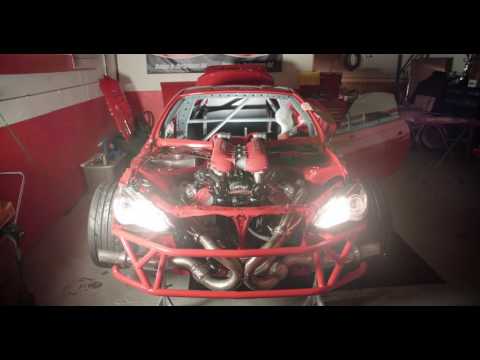 The Toyota GT86 – also known as the Subaru BRZ and Scion FR-S – has been a favorite when it comes to street drifting and even in drifting championships. In fact, Tuerck drives a Scion FR-S in his races. Now, the powerplant that powers a typical Toyota GT86 is a naturally aspirated four-cylinder engine that employs Subaru's horizontally opposed boxer engine design.

Shoehorning a Ferrari 4.5-liter V8 in place of the four-cylinder engine could be very tricky. This is particularly because the GT86 is a front-engine car, while the Ferrari 458 Italia is a mid-engine machine. The GT86 isn’t really built to be powered by the 4.5-liter V8 engine. Thus, a great deal of work is needed to make sure that the GT86 is prepped to take in such a powerful V8 engine.

For instance, the chassis of the GT86 has to be stiffened and prepped further than when it is competing in Formula D. Tuerck and partner Shawn Hudspeth of Huddy Motorsports mounted the V8 engine in the GT86 with the custom headers facing the other direction with forward-facing exhaust piping. They also positioned the intake manifolds higher than the GT86’s hood line, with the sticking through the base of the windshield.

In addition, Tuerck and Hudspeth heavily altered the suspension geometry of the GT86 to get the steering angle sideways. They also stripped the GT86 of its usual interior and installed a roll cage and bucket seats.

They also fitted the car with bolt-in fender flares and made several modifications that should allow it to pull off big slides. The car rides on gold finished Fifteen52 Penta 18-inch three-piece wheels wrapped in Hankook RS3 tires with 245/40R18s on the front and 265/40R18s at the rear. It also boasts of large Brembo brakes and GT-R six-piston setup, as well as a hydraulic handbrake from Nameless Performance.

After the engine swap and all these modifications, the Ferrari-powered Toyota GT86 has been christened as the Toyota GT4586! It is now being displayed at the 2016 SEMA Show at the Las Vegas Convention Center.

SEMA Show-bound Future Forty by Superformance is a GT40 replica with Ford GT engine
Visitors at the much-awaited 2018 Specialty Equipment Market Association (SEMA) Show – scheduled from Oct. 30 to Nov. 2 -- can expect a wide array of show cars that demonstrate...

2018 SEMA Show: This Hellephant 426 is 1,000-hp Supercharged Mopar Crate Hemi engine
Mopar just brought a mammoth at the 2018 Specialty Equipment Market Association (SEMA) Show in Las Vegas, Nevada. Mopar is introducing a new crate engine that is like an elephant...

2018 SEMA Show: Three VW Jetta builds on its way to showcase aftermarket parts
The 2018 SEMA Show in Las Vegas in just around the corner (October 30 to November 2), and people are expecting special parts and equipment as well as concept builds...

2018 SEMA Show: Nissan to display five one-off vehicles including a 370Z Project Clubsport 23
The 2018 Specialty Equipment Market Association (SEMA) Show in Las Vegas is about to start and Nissan won't itself be outdone by other carmakers. In fact, Nissan will be gracing...

2019 Chevrolet Camaro SS in new Shock Yellow exterior color is up for display at 2018 SEMA Show
Chevrolet seems to take the 2018 Specialty Equipment Market Association (SEMA) Show very seriously. This I evidenced by the fact that carmaker is bringing more than a dozen Chevrolet vehicle...
Facebook